Organizing your research and interests

Important to our school district's two-year human-centered design project is the gathering of secondary resources to combine with interview data to identify and analyze patterns that will point our design thinking towards prototyping and other action. I've found that educators sometimes have very weak skills in finding, evaluating and storing this type of research because they've done so little of it since their undergrad days.

For me, the most effective Internet search tool for resources I'm interested in is through Twitter and relevant hashtags. Because I use Tweetdeck on my MacBook Air with multiple feed columns based on hashtags or lists for relevant topics, much of the research comes to me instead of wasting hours on Google or other similar search machines. When I quickly peruse the latest Tweets that come in, if I spot a link that interests me I can quickly scan it and decide if it's something I want to share or explore in more depth. I can then either bookmark the article/post or favorite it in my Tweetdeck feed for later.One other organizing tool I use is called DEVONthink which allows me to quickly drag a link or article into an Inbox (the general inbox or a folder I've set up for a topic) for later. DEVONthink is a powerful research and writing tool because it has the capability of searching your resources based on tags or topics. I've only begun to better understand how to use this power.Online sources that are particularly relevant to me I bookmark in my RSS reader and follow their posts more closely. I use Protopage as my reader because its so simple to add another source and organize them by my interests (i.e., News, Education, Detroit Red Wings, Running).

I know I'm preaching to the choir for most of you on Twitter who came to read this post, but there may be those in your schools or districts who could use a little help getting organized. I would also be interested in hearing what works for you.

Below are screenshots taken for each of the three tools I mentioned above as I was writing this Sunday morning post. 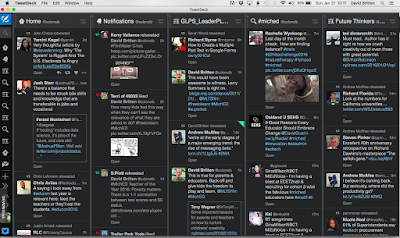 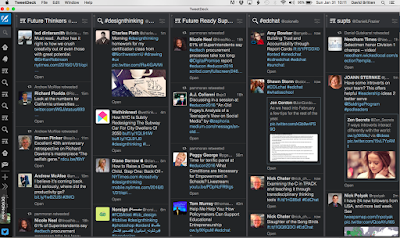 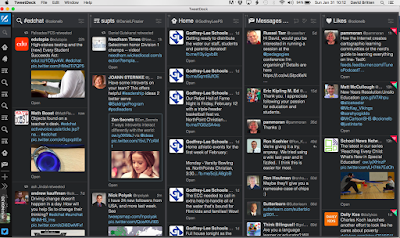 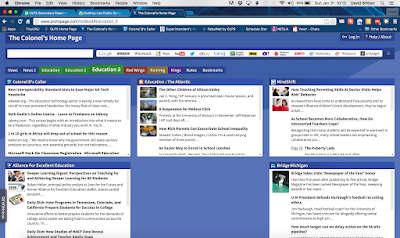 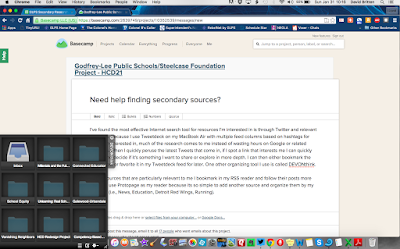 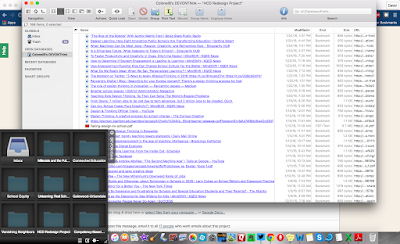 Posted by David Britten at 10:33 No comments: Links to this post

For what it's worth, Governor Snyder should have sent in a general

Look, we elect mayors and governors and presidents thinking that whoever it is will be able to handle the office and whatever comes up, but the truth is few of them ever have an opportunity (thankfully) to handle a crisis such as the Flint Water scandal. What we've found in out in Michigan is that Governor Rick Snyder is incapable of crisis leadership. No shame there, most folks would have fouled it up just as bad. Leading a computer company and whatever other business enriched his bank account doesn't qualify him to take the reins in a crisis of this magnitude and lead. In fact, he would have been far better off delegating full authority and responsibility for this crisis back when it first surfaced to my old friend, and now commander of the Michigan National Guard, Major General Greg Vadnais.
During General Vadnais' tenure as Commander, 38th Infantry Division (Mechanized), over 9,000 soldiers were mobilized and deployed to 17 different countries including Iraq, Afghanistan, Bosnia, Kosovo, Egypt and to numerous other security missions in the United States and abroad. Greg was the Commander for Joint Task Force-Cyclone in response to Hurricane Katrina providing command and control of the over 14,000 Soldiers and Airmen deployed in Mississippi. When he commanded the 46th Brigade 38th Infantry Division, I was serving as his deputy. I know what he's capable of and he would have definitely kept Snyder's bacon out of the fire. He would have acted decisively and left the studying to the academics.
Instead, General Vadnais was left with cleaning up some of Snyder's mess by commanding water resupply, long after the Governor's damage was done.
Posted by David Britten at 17:40 No comments: Links to this post

The Fonz on grading versus learning: He got it right 40 years ago

Posted by David Britten at 06:12 No comments: Links to this post