In the musical “Hamilton,” the 46th and final song starts out when the character of George Washington states, “Let me tell you what I wished I'd known, when I was young and dreamed of glory, you have no control, [ensemble] who lives, who dies, who tells your story.” This is an abbreviated story of Major Henry D. MacNaughton whose memory has long since passed from most and has not received just due for his story. 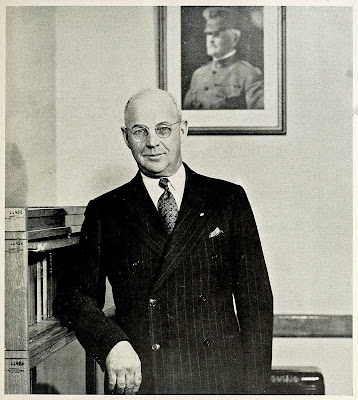 MacNaughton (sometimes spelled McNaughton) was born in Ada Township, Kent County on May 15, 1879. The son of Dougal and Charlotte (Bettis) MacNaughton, he was the oldest of six children. Throughout much of his life he would have four other birthday years, including 1880, 1882, 1883, and 1887. This was a time when formal documentation of birth was not always accurate or available so age could be “flexible” to suit an individual’s purpose. For MacNaughton, those purposes appear to have centered around his desire to serve.

By 1903, Henry had moved into Grand Rapids and five years later took Mabel Haines as his bride. Together they resided at 496 North College Ave. He had been a school teacher according to the 1900 census, but it’s not evident where he was teaching at the time. In 1907, MacNaughton graduated from Kalamazoo Normal School (now Western Michigan University) as president of his class. That March, he hired in as principal for the Godfrey School in the northeast corner of Wyoming Township at $70 per month. He had been teaching a three-month civil service course at the Y.M.C.A. to prepare for March exams, but would resign that responsibility the following year. At the time, MacNaughton was one of only two teachers, but the school district population was growing so quickly the board had to keep adding classrooms. Two were added that summer. The following February, the board rehired him for another year with a $5 per month raise. Two months later, with the obvious growth of responsibility he was incurring, he requested an additional $5 and the board approved. 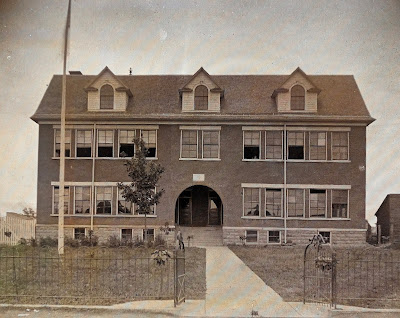 The Godfrey Avenue school, like many in rural areas, had been K-8 only, but in 1909 at the request of several students, a 9th and 10th grade was added. Now the building was overcrowded once again, and so a nearby empty store had to be rented for the overflow while more rooms were being added. MacNaughton requested another raise of $10 per month but the board balked and would only agree to $2.50, giving him thirty days to decide. As a result, he resigned at the end of the 1910-11 school year. 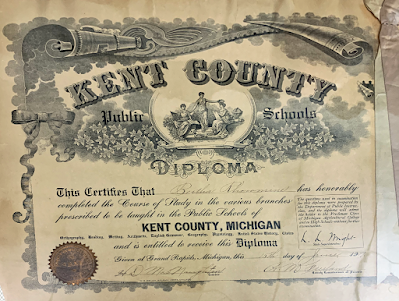 After leaving the Godfrey Avenue school, MacNaughton took a position as principal/superintendent of the Rockford School, where he would also serve for a time as Kent County school examiner. In 1914, he was selected to serve as president of the board of directors for the newly organized Kent County Athletic association that included the following schools: Sand Lake, Cedar Springs, Rockford, Sparta, Kent City, Lowell, Ada, Grandville, South Grand Rapids, Comstock Park, Byron Center and Godfrey Avenue. It was divided into a northern division, southern division, and tenth grade schools. An annual field day was the premier event. The association had been his idea given the lack of organized athletics outside of the city schools and the old West Michigan Fairgrounds at Comstock Park were used as the spring event site.

In 1910, MacNaughton served as secretary for the U.S. Senatorial Committee for Kent County backing the election of Republican Charles E. Townsend.

America entered the World War in 1917, and Henry D. MacNaughton must have decided to head to Fort Sheridan to earn a commission as 1st Lieutenant of Infantry, one of 37 newly-commissioned officers from the Grand Rapids area. His officer training course ran from August 27 to November 26, 1917. He was already 38 years old when he accepted his commission. No official record of his appointment has been found to verify that he reported his actual age. 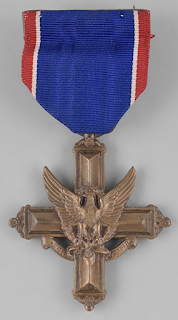 MacNaughton embarked for France out of Hoboken, New Jersey on January 11, 1918 as a casual and was likely assigned to his unit upon arrival there. He was promoted to Captain on November 9 after having earned the Distinguished Service Cross “for extraordinary heroism in action while serving with the 117th Infantry Regiment, 30th Division, A.E.F., near Molain, France on October 17, 1918. Advancing for 100 yards under heaving shell and machine-gun fire, Captain MacNaughton went with a soldier to the aid of a wounded man who had a leg blown off by an antitank shell. Showing utter disregard for personal danger, Captain MacNaughton dressed the wound of the soldier, who had fallen near the tank which was still being shelled, and then carried the wounded man to safety.” War Department, General Orders 81 (1919). McNaughton also received the French Croix de Guerre with gold star.

Back to the School House

Upon returning from the war, MacNaughton took a math teaching position at Grand Rapids Union High School after earning an A.B. degree from the University of Michigan. He was also working with his brother as a real estate broker for Michigan Home Realty Company in the downtown Houseman Building, and was elected for another two-year term as county school examiner by the board of supervisors. He later attended Columbia University and received a master’s degree in school administration.

In 1922 the Grand Rapids school board opted to install him as principal of Strong Junior High School. Much like his predecessor, he could teach math and had experience supervising a session room. 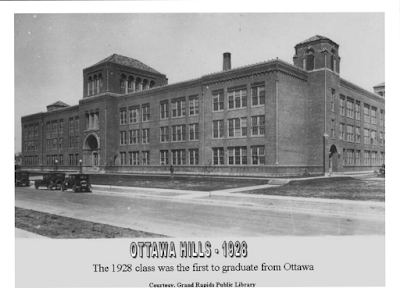 He must have impressed the board and administration during his stint at Strong, because just three years later. MacNaughton was appointed the first principal of the new Ottawa Hills High School in Grand Rapids. The doors opened to about 650 students and thirty teachers, many of whom came from Strong Junior High where they had taught with MacNaughton. At first, it included only grades 7 through 10.  Four years after opening, two large homerooms and four classrooms were added. An elementary wing was added in 1931. By 1939-40, the high school enrollment had reached 1,801. Despite interruptions during World War II, MacNaughton would remain at Ottawa Hills until his retirement.

MacNaughton made the decision to continue his reserve military career and excepted an appointment as 1st Lieutenant on July 28, 1922 with Howitzer Company, 126th Infantry in Grand Rapids. He was promoted to captain two years later and placed in command of Company M. Interestingly, his birthdate in the 1927 Military Register was listed as May 15, 1887 (eight years younger than his actual age). He may have been trying to avoid being classified as over age. Two years later, the National Guard register split the difference and listed his birthdate as May 15, 1883. 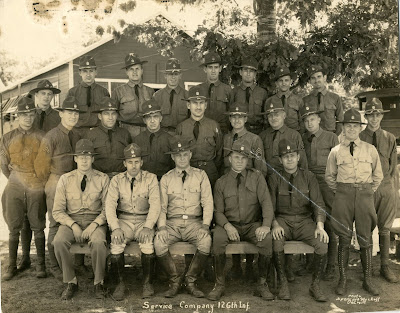 By the early 1930s, MacNaughton was commanding Service Company and one has to wonder if his actual age was catching up to him, resulting in a move from a more physically demanding assignment with Company M.  In October 1940, the 126th mobilized for a year-plus of training in Louisiana. MacNaughton, was appointed the acting regimental supply officer in November and promoted to Major shortly after. 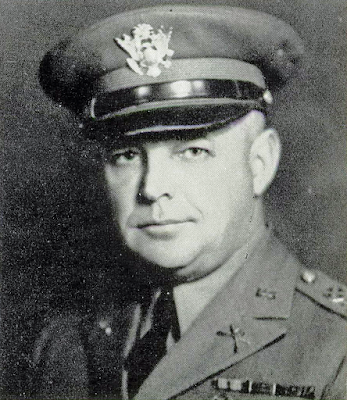 But, in the fall of 1941, it was determined by Army regulations that MAJ MacNaughton was over-age for assignment to a combat organization. By now, his actual age was 62. Before leaving Camp Livingston to return to Grand Rapids, Service Company officers and enlisted personnel threw him a farewell dinner and the regiment paid tribute “to its last World war hero” with a review ceremony. Following the events, MacNaughton left for home and resumed his duties as principal of Ottawa Hills High School that November. 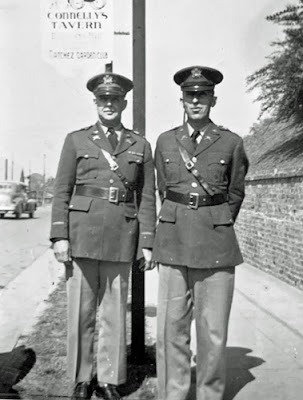 In May 1942, MAJ MacNaughton was recalled to active duty, sent to an officers’ school at Fort Sheridan, Illinois, and assigned to a military police unit. Both he and LTC Sidney Z. Eleveld, a teacher at Ottawa High School, were assigned to lead the 740th Military Police Battalion at Camp Skokie Valley, Glenview, Illinois. Eleveld served as battalion commander and MacNaughton his executive officer.

Having exceeded the statutory age for grade requirements, MacNaughton was placed on inactive duty status with the Michigan National Guard headquarters in August 1943, and returned once again to Grand Rapids to assume his principal duties at Ottawa Hills. He still had one more military duty to fulfill, however. In November 1945, with the war at end, he was appointed by The Adjutant General to serve as a recruiting officer for the Grand Rapids area, with special emphasis on enlisting former Guardsmen and veterans.

MAJ MacNaughton was elected president of the Army and Navy club during a November 1945 meeting in the University clubrooms. The next summer, he was selected to a board of officers to review enlistment and commission applications for the reactivation of the 126th Infantry Regiment.

In 1949, MacNaughton was official retired from military service.  The following year, Ottawa High School alumni and staff celebrated its 25th anniversary and recognized its first principal, who had decided to retire that summer. He was now 71 years old and was wrapping up a half-century as an educator, community and military leader, and World War hero. He and his brother, John D., founded an investment securities firm. In 1963, his wife of 55 years passed away. They had been blessed with three daughters, all of whom lived into their 90s. 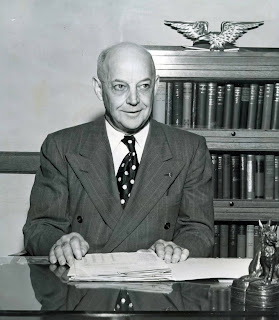 Aside from his military and educational careers, he led a busy life and was active in many organizations. MacNaughton was a charter and life member of the Malta Lodge No. 465 F&AM, and a life member of the Saladin Temple Shrine. He was a member of the Teacher Club and High School Principal Club, past president of the Army and Navy Club., and past commander of the Stewart-Howe American Legion Post No. 355. He was also a life member of the Retired Officers Association of the Michigan National Guard.

Henry D. MacNaughton, who had been suffering from an extended illness, died on December 1, 1975 and was buried with military honors at Woodlawn Cemetery. He was officially 96 years old. The 1942 Ottawa Hills High School yearbook had called him a "Builder of Men." 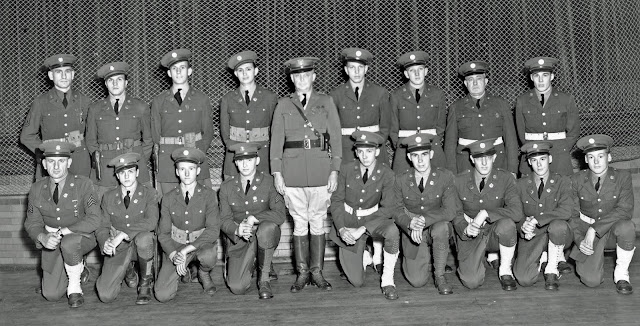