75 years ago: Extraordinary Bravery while Seizing the Ormoc Valley

The conquest of Leyte in the fall of 1944 was taking longer than expected since the Japanese had decided to make it the decisive battleground of the Philippines. This forced the Sixth Army to commit the 32nd Infantry Division along with several other combat elements. As part of the X Corps, the 32nd would drive south along Highway 2 with the 1st Cavalry Division on its left. 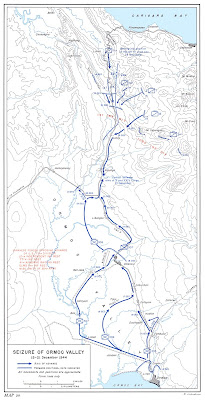 By December 14, the 32nd Division had advanced more than two miles south of Limon, reaching the main Japanese Defensive line. It had been a slow march for the 126th Infantry:

Every bend of the road was lined with . . . foxholes dug into the banks of the road and spider holes dug underneath the roots of trees and under logs on the hillsides. It was bitter, close hand to hand fighting and because of the steepness of the terrain, the denseness of the tree growth, the inaccuracy of maps and nearness of adjoining units, artillery and mortar fire could not be used to is full advantage in reducing these positions. (32nd Div Opns Rpt Leyte)

The Japanese were well entrenched on a series of ridges overlooking Highway 2. A heavy rain forest covered the ridges and the deep ravines in between. Targets could not be spotted beyond a range of about 75 feet. The troops had to “approach within spitting distance of the [enemy] guns” before they could locate the weapons. (32nd Div G-3 Periodic Report 30)

On December 15, the 32nd Division’s regiments were fighting valiantly in the effort to seize the Ormoc Valley, when two soldiers from the 126th Infantry Regiment exhibited outstanding acts of individual bravery. 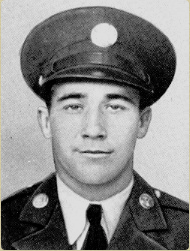 Leroy Johnson entered the Army on November 26, 1941 from his home in Oakdale, Louisiana, where he had been employed as a carpenter. One of nine children, he was born to Leander and Isaline Marcantel Johnson on December 6, 1919 at Caney Creek, Louisiana. It’s likely that Johnson ended up with the 126th Infantry, 32nd Infantry Division due to the Louisiana Maneuvers that were underway at that time.

With the 126th Infantry from its start in the New Guinea campaign, Sgt. Johnson was awarded the Silver Star for “for conspicuous gallantry and intrepidity in connection with military operations” against entrenched Japanese near Sanananda, New Guinea on December 22, 1942, while serving with Company K.

On December 15, 1944, Sgt. Johnson was on a lone scouting mission into Japanese-held territory in the Leyte Province. When he located an enemy machine gun, he reported the position to his company commander, who in turn gave Johnson the mission of destroying it. He selected three men for this purpose and led the patrol to within six yards of the Japanese position. They tossed several grenades and knocked the gun out. Enemy soldiers in flanking foxholes tossed grenades at Johnson. As he was starting to take cover, he spotted two of the grenades near the men of his patrol. Before they could explode, he threw himself across them and took the full force. Although fatally wounded, he managed to withdraw several yards to a point where his company commander and others had been pushing up to assist.

The full citation of his award reads as follows: 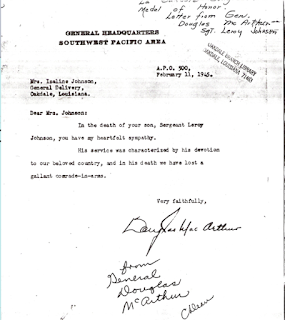 The President of the United States of America, in the name of Congress, takes pride in presenting the Medal of Honor (Posthumously) to Sergeant Leroy Johnson (ASN: 34154178), United States Army, for conspicuous gallantry and intrepidity in action above and beyond the call of duty on 15 December 1944, while serving with Company K, 126th Infantry Regiment, 32d Infantry Division, in action at Limon, Leyte, Philippine Islands. Sergeant Johnson was squad leader of a nine-man patrol sent to reconnoiter a ridge held by a well-entrenched enemy force. Seeing an enemy machine gun position, he ordered his men to remain behind while he crawled to within six yards of the gun. One of the enemy crew jumped up and prepared to man the weapon. Quickly withdrawing, Sergeant Johnson rejoined his patrol and reported the situation to his commanding officer. Ordered to destroy the gun, which covered the approaches to several other enemy positions, he chose three other men, armed them with hand grenades, and led them to a point near the objective. After taking partial cover behind a log, the men had knocked out the gun and begun an assault when hostile troops on the tank hurled several grenades. As he started for cover, Sergeant Johnson saw two unexploded grenades which had fallen near his men. Knowing that his comrades would be wounded or killed by the explosion, he deliberately threw himself on the grenades and received their full charge in his body. Fatally wounded by the blast, he died soon afterward. Through his outstanding gallantry in sacrificing his life for his comrades, Sergeant Johnson provided a shining example of the highest traditions of the U.S. Army. 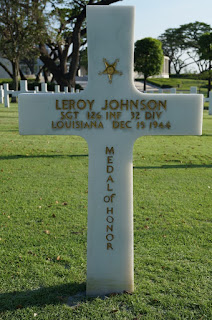 On October 28, 1945, Johnson’s father received the Medal of Honor on behalf of his son from Colonel John H. Curruth, then commander of Camp Claiborne, Louisiana. The New Orleans army base on the south shore of Lake Pontchartrain was renamed in Sgt. Johnson’s honor on November 25, 1947, but was later closed. An Army Reserve Center was built on part of the old camp on Leroy Johnson Drive. A bronze memorial plaque from the old camp was moved to the Oberlin courthouse. In 1965, a cast aluminum plaque was erected in the center of Oakdale to honor him. 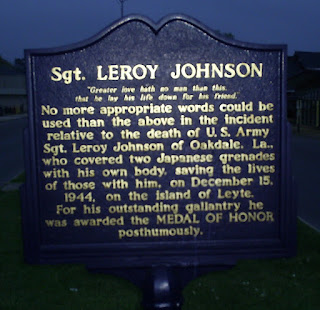 Dirkjan (Dirk) Cornelius Vlug was born on August 20, 1916 in Maple Lake, Wright County, Minnesota, to Isaac and Wilhelmina (Dekker) Vlug. He was one of six children. He joined siblings Peter (born 1909), Alida (born 1912) and Wesselina (born 1914). Farmers in Minnesota, the Vlugs had two more children after Dirk, Gertrude born in 1918 and Marian born in 1922. When Dirk was six years old the family moved to Michigan. By 1930 Isaac Vlug had settled the family on the west side of  Grand Rapids taking up carpentry as a trade to support his family.

He joined the Army in April 1941 and was sent south to be a part of the 126th Infantry Regiment, 32nd Infantry Division.  On December 15, 1944, Vlug had been tasked with defending the roadblock on the Ormoc Road. When it was attacked by a group of enemy tanks, he left his covered position, and with a rocket launcher and six rounds of ammunition, advanced alone under intense machine gun and 37-mm fire.  The following citation describes the action and results in detail: 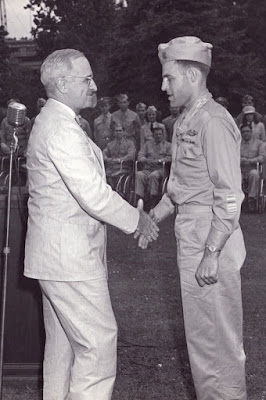 The President of the United States of America, in the name of Congress, takes pleasure in presenting the Medal of Honor to Private First Class Dirk John Vlug (ASN: 36155103), United States Army, for conspicuous gallantry and intrepidity above and beyond the call of duty while serving with Headquarters, 1st Battalion, 126th Infantry Regiment, 32d Infantry Division, in action on 15 December 1944, at Limon, Leyte, Philippine Islands. When an American roadblock on the Ormoc Road was attacked by a group of enemy tanks, Private First Class Vlug left his covered position, and with a rocket launcher and six rounds of ammunition, advanced alone under intense machine gun and 37-mm fire. Loading single-handedly, he destroyed the first tank, killing its occupants with a single round. As the crew of the second tank started to dismount and attack him, he killed one of the foe with his pistol, forcing the survivors to return to their vehicle, which he then destroyed with a second round. Three more hostile tanks moved up the road, so he flanked the first and eliminated it, and then, despite a hail of enemy fire, pressed forward again to destroy another. With his last round of ammunition he struck the remaining vehicle, causing it to crash down a steep embankment. Through his sustained heroism in the face of superior forces, Private First Class Vlug alone destroyed five enemy tanks and greatly facilitated successful accomplishment of his battalion's mission.

The folks back home in Grand Rapids first received news of Vlug’s heroic actions in a Grand Rapids Press article on January 9, 1945. Following his discharge from the service on June 14, he returned home to his parents.

For his actions, Vlug, a veteran of the Buna, Saidor, Aitape and Morotai campaigns prior to Leyte, was issued the Medal of Honor by President Harry S Truman a year and a half later on June 7, 1946. Vlug had been back at work at the American Seating Company in Grand Rapids when he learned he would receive the award in Washington, DC. His family accompanied him to the White House and when he returned home, the entire city celebrated his accomplishment, setting up a fund which he and his soon-to-be wife used to purchase a home. On August 16, 1946, Vlug married Angie Sikkema in McBain, Missaukee County, Michigan. Together they raised three daughters: Carol, Margie and Meribeth.

He subsequently left the army and joined the Michigan National Guard in May 1949 along with two other area Medal of Honor recipients: 1LT John C. Sjogren and 2LT Francis J. Pierce. Vlug was sworn in with the rank of Master Sergeant and took great pride for the next couple of years serving as color sergeant for the regiment. He retired from military service in January 1951.

In 1950, Vlug became a postal carrier in Grand Rapids retiring his position in 1976. 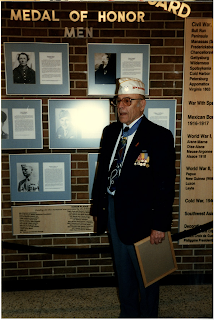 Years later, while being interviewed about his experience and having earned the nation’s highest military award, Vlug responded, “I was no different than any other soldier. I saw a chance and took it. I guess, though, that you have to be a keyed-up sort of guy to do what I did. You can’t just sit back and let things happen.”

Other honors afforded Vlug included designating the drill hall at the Grand Valley Armory in Wyoming, Michigan after him and an honorary street designation adjacent to the Grand Rapids Veterans Memorial Park. “Dirk Vlug Way” was unveiled on Veterans Day 1999. He also received Michigan’s top military award -- the Distinguished Service Medal -- in 1992. In 1994, he returned to the Philippines to participate in the 50th commemoration of the island’s recapture from the Japanese. 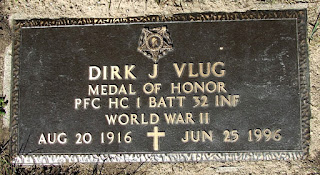 Vlug was active in local veterans organizations including the 32nd “Red Arrow” Club and 126th Infantry Association. He died suddenly on June 24, 1996 and was buried with full honors in Greenwood Cemetery. Remembered by his friends as an intensely humble man who rarely spoke of his heroics, his wife was quoted as saying “A lot of other people flaunt it, and he was very upset about other Medal of Honor Winners who flaunted it. He just wasn’t that way.” 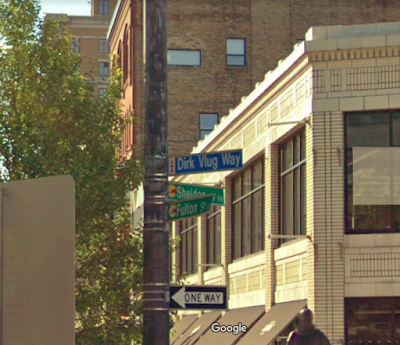 Posted by David Britten at 12:23 No comments: Links to this post

Colonel Merle Howe: "You go there and back for a commander like him."