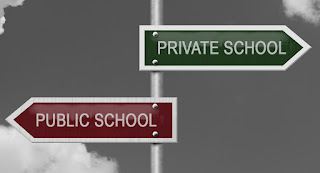 The final version of the House and Senate tax plan which will likely be voted on this week includes a provision to expand the benefits of "529 savings plans" to include tax-free distributions to pay for K-12 tuition and/or homeschool expenses. According to Forbes, "The best sign this is smart policy is that the Left is going completely apoplectic. They hate the idea that parents can free themselves from the big teachers' unions..." In other words, the tax bill is intended by the wealthy, who have money to invest, to further cripple one of our most venerable and important public institutions, but is that all it is? No.

Previously, 529 plans have offered tax-free earnings growth and tax-free withdrawals when invested funds are used to pay for college. With the new law, families will be also able to withdraw up to $10,000 per year tax-free for elementary, high school or homeschool expenses. But here's the catch according to the Chronicle of Higher Education: "In order to save money, you have to have money. While some families with incomes below $50,000 hold accounts, the bulk of account holders make more."

Richard V. Reeves of the Brookings Institute, author of Dream Hoarders: How the American Upper Middle Class Is Leaving Everyone Else in the Dust, Why That Is a Problem, and What to Do About It, claims: "As we show in our new paper, 'A tax break for "Dream Hoarders": What to do about 529 college savings plans,' almost all of the benefits of the deductions go to families at the top of the income distribution (emphasis added).  In other words, the folks who don't really need the tax breaks to send their kids to private schools, and on average didn't need them to meet college costs, will now enjoy a further economic advantage with an expanded 529 plan.

The Brookings Institute published several charts to illustrate who benefits the most from 529 plans. They pretty much speak for themselves: 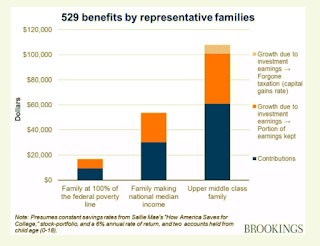 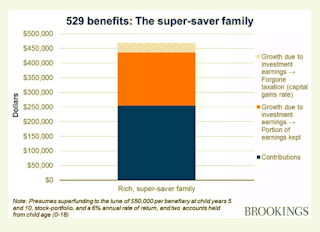 President Obama, recognizing the inequity of the 529 plans initiated by President G.W. Bush, attempted in 2015 to change them so that the benefits would go to a broader range of families. This was shot down by not only the Republicans but also members of his own party, which once again demonstrates that the wealthy have all the power when it comes to politics. Those of us on the lower end of the economic scale have none. At that time, the GAO pointed out that the main beneficiaries to 529 plans are upper-middle-class families. It found that back in 2010, nearly half of all families with 529 plans had an annual income of over $150,000. Of course they do, because they have the money to invest to accrue the long-term tax benefits. But most in the upper brackets, don't need them.

Voices for Kids provides a concise summary of the potential damage and further inequity created by this last minute amendment to satisfy anti-government conservatives:


Both the House and Senate bills included provisions that would expand the 529 college saving account plan, which allows parents to save money and withdraw that money for higher education expenses (tax-free) to also cover up to $10,000 of tuition at private and parochial schools. (Language in the Senate bill also covers home schooling expenses.) The provision is a federal subsidy for private and parochial school tuition.

As it currently stands, 529 plans are used by largely upper-income households (median income of $142,400) and by making the proposed changes, it will only increase the growing inequality in educational attainment between high-income families and low and middle-income families. The planned expansion of this tax break is welcomed by school choice advocates, who argue that public schools are unable to properly educate students and should be more market-oriented. However, this planned expansion would be largely unavailable to low and middle-income families.

In reality, this plan does not really expand school choice options to anyone. It actually undercuts the savings benefits of the plan if they are used for private and parochial K-12 tuition. Pulling out the money sooner both lessens the tax benefit of the plan and leaves less money available in the plan for college. If you are a wealthy family, this is not much of a problem. But if you are a middle class or low-income family, it would be very unwise to use this money before college. The only real beneficiaries of this expansion would be people who are high-income and wish to have the government subsidize their kids private school tuition.

Withdrawing funds from the savings plans sooner rather than later could also have implications on the investment strategies employed by states and fund managers. Such changes could impact the eventual rates of return for all participants in 529 programs.
Along with capping the deduction for local property taxes and/or state and local income and sales taxes at $10,000, the 529 measures could set back public funding for education. Combined with the trillion dollar plus increase to the federal deficit the tax bill could bring, it’s another demonstration of why our members of Congress need to vote down this bill.

The National Center for Learning Disabilities is also concerned that 529 plans would not only harm public schools but further limit quality educational opportunities for students with disabilities:

First, expanding the use of 529 plans in this way would benefit only some families. These savings plans are not accessible to low- and middle-income families who cannot pay out-of-pocket for private school tuition. Only those parents who can afford to save thousands of dollars to pay for private school out-of-pocket will be able to use a 529 plan.

Instead of creating a federal tax incentive program that reduces tax revenue for some families and diverts public funding to pay for private education, we should be investing in our public schools and providing resources to ensure that all students receive a high-quality education.

Posted by David Britten at 09:12 No comments: Links to this post

100 Years Ago: 126th Infantry finalizes training and prepares for embarkation to France

West Michigan's 126th Infantry and its parent 32nd Division (Michigan and Wisconsin) were ensconced in in a rigid training camp at Waco, Texas throughout the fall and early winter of 1917-18, as they awaited impending orders for transport to Europe.

Toward the latter part of November, new training schedules were taken up including instruction in the "new infantry weapons and specialties for all troops." This included new offensive maneuvers based on lessons learned from the European battlefields. The all-important training in the wearing of a gas mask and the digging of trenches were undertaken. Full-pack night marches as long as nine miles was part of the regular regimen.

The disciplined training paid off.


"During the latter part of November and early in December the Division was visited and carefully examined by War Department artillery and infantry inspectors, and was judged ready for overseas service. Their reports to Washington indicated that the 32nd was more advanced in its training at that time than any other division then in the U.S. Its equipment was very nearly complete, and the spirit which had developed no doubt also influenced the inspectors. Accordingly notice was shortly forthcoming from Washington that the Division would be sent to France at the earliest practicable date.

"Many officers and men, of course, desired furloughs to say good-bye to the folks at home; but the journey north was a long one, and there was considerable uncertainty as to just when the movement would begin, so leaves were impracticable, and relatives who took the hint that there might shortley be 'something doing' came to Waco for the final farewells."

Despite large numbers of men received from Camp Custer (Michigan) and Camp Grant (Illinois) during the last three months, the division would still be greatly under strength at the time of embarkation in January 1918. 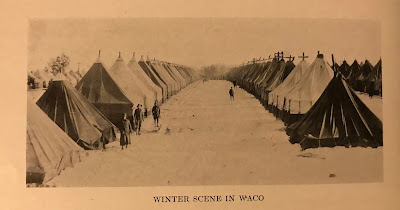 The 32nd Division was organized with the following principle units:

There had been several significant reorganizations of the division and regiments during the train-up period which resulted in the following organization of 126th elements and cities each originated from:

The Machine Gun Company, Supply Company, Sanitary Detachment, and Band, all from Grand Rapids, virtually remained unchanged except to receive personnel from throughout the regiment to bring them to full strength. The regimental headquarters detachment was also from Grand Rapids and made up of men from the former Company L.

About this time, Brigadier General William G. Haan, a regular army officer, was placed permanently in command of the Division. He would come to be respected and loved by his soldiers.


"The period of training at Camp MacArthur until the middle of January was onecontinual round of hard work from early morning until late at night. It was a period, Ithink when we first realized the possibilities of the human body and mind to withstandfatigue." (Hamburger)

Gansser, Emil B. History of The 126th Infantry in the War with Germany. Grand Rapids, MI. 1920

Joint War History Commissions of Michigan and Wisconsin: The 32nd Division in the World War. 1920