In Response to Five Unanswered Questions in the SIG Data


"So the U.S. Department of Education released summary data last week on the School Improvement Grant or SIG program. In a nutshell, the data showed that after $3 billion in stimulus funding, plus more than $1 billion in regular congressional appropriations, roughly two-thirds of SIG schools that were in the program for two years showed some improvement. But another third of SIG schools stagnated—or even slid backward.
"There are big differences of opinion over whether that constitutes "incremental progress" (U.S. Secretary of Education Arne Duncan's view) or whether that's a total disaster for the already controversial, much maligned SIG program.
"But almost everyone agrees that the data left out a lot of things that could prove pivotal when trying to make claims about the efficacy of the program..."
What was not pointed out was the success of Wyoming, Michigan's Lee High School (Godfrey-Lee Public Schools) during the three years it effectively employed a SIG grant after being notified in 2010 that it was on the dreaded list of persistently low-achieving schools (PLA). In short, the school went from the 9th percentile of all Michigan schools to 63rd percentile in just the first two years of the grant. During the third year it lost a few points but still leads most of the surrounding high schools in the rankings.
Also not pointed out was the fact that the staff, students and parents of Lee High School were able to do this in spite of being located in a one-square-mile school district of 1,900 that:
1. Has the 5th lowest property value per pupil in the State of Michigan.
2. Has the highest poverty percentage in the county for school-age children ages 5-17.
3. Has the second highest percentage of limited English language students in the state.
4. Has a student body that is 85% "minority."
5. Has a transiency rate by the end of 8th grade of nearly 50% of its students, where less than half of the students have been attending district schools for 3 or more years.
6. Has had to cut staffing and trim critical programs due to a 14% real dollar decline in the per pupil foundation allowance over the past ten years, including a $470 per pupil cut by the current Governor.
Despite the obstacles listed above, nearly 30% of students who attend the district are enrolled through schools-of-choice having decided that Lee High and our other schools have the programs and family-centered learning climate they want. In fact, the district's overall enrollment has ballooned by more than 33% since 2002 and Lee High School currently has the largest enrollment in its history.
And despite occasional accolades from Michigan Department of Education staff delivered to us second-hand, not one elected leader in this state or elsewhere has ever stopped by or even bothered to communicate "job well done."
And people wonder why our students and staff call themselves Rebels.

Posted by David Britten at 16:26 No comments:

Is Proposal A aiding in the destruction of Michigan's public school system? Was that the real purpose?

At one point or another lately, you've probably come across statements like the following:

“Proposal A fails to ensure either fiscal stability or financial adequacy for Michigan schools.”

“Most central city and low-income suburban districts are worse off under Proposal A, because slow growth in the per-pupil foundation allowance has been accompanied by falling enrollments.”

“The real value of every district’s foundation allowance has declined in each of the last two years.”

“Education revenues in Michigan are no longer keeping pace with the rising operating costs that schools face, and school districts across the state are cutting programs and services in response.”

“Schools facing higher costs must overcome an immediate disadvantage in their efforts to educate children to meet ambitious state performance standards. The Legislature should ensure that the basis for distributing revenues to schools and school districts reflect the actual cost of educating different students.”

“Districts with differing racial compositions have…fared differently under the finance reform….The districts with the highest share of African-American students have had the smallest foundation allowance increases since 1994.”

“The average foundation allowance increase was greater for districts falling between the 20th and 80th percentiles of family income distribution than for the state’s poorest quintile of districts.”

“Enrollment decline overwhelmed the fiscal benefits of modest foundation increases in both central cities and low-income suburbs. In both groups of districts total real foundation revenue has fallen significantly since the adoption of Proposal A.”

“Proposal A facilitates (a population shift from rural and poorer urban areas to suburban districts, and from older suburbs to newer suburbs on the periphery of the state’s metropolitan areas), because school funding follows students as they move. At the same time Proposal A also forces reductions in educational services in districts where enrollment is declining. Newer suburban districts receive large infusions of additional funds to expand their educational offerings, while older urban communities must make staffing and program cuts. These school budgetary changes, in turn, influence households’ perceptions of the conditions of local schools. School closures and teacher layoffs can create negative perceptions that enhance the prospect that additional families will leave a community, creating a self-reinforcing cycle. For these reasons, Proposal A may not only respond to suburban sprawl, but encourage it as well.”

“In contrast to the school funding formulas in several other states, Michigan’s school aid is not adjusted for the different cost of living (and running schools) in different parts of the state, nor does it fully acknowledge the differential cost of educating different kinds of students (e.g., elementary versus secondary students, children with special needs).”

Arsen and Plank recognized the significant faults of Proposal A even before the Great Recession and a $470 per pupil cut in the foundation allowance under Governor Rick Snyder. This blog post will begin my efforts to demonstrate that the results of combining Proposal A with schools of choice have been nothing more than poorly disguised purposeful efforts from the Engler days to damage public education and move towards greater privatization. And the current Legislature and Governor are playing right along.

Posted by David Britten at 17:06 No comments:

"We need to be cautious about talking too much about these activities. Many of the activities and the political work that needs to go on will go on at the grass roots. It will go on quietly and it will go on in the form that often politics is done - one person at a time, speaking to another person in privacy. And so these issues will not be, maybe, as visible or as noteworthy, but they will set a framework within states for the possibility of action on education reform issues."

Dick DeVos presenting his covert ideas for the privatization of public education during a 2002 speech to the Heritage Foundation.  Much of what he suggested is playing out today under the guise of so-called "choice," using tactics such as the following designed solely to turn everyday citizens against their public schools. He takes advantage of a growing anti-government mood by advocating an Orwellian strategy of twisting language to spread the fire:


"Communicate the message that school choice works and helps public schools." DeVos then qualifies his statement by asking the audience to quit using the term public schools and use "government schools" or "government-run schools" instead.

Then he sits quietly in Ada or any one of his other millions-of-dollars mansions working behind the scenes just as he suggested until he reaches his agenda: Private schools for some financed by public dollars and disintegrating, segregated, impoverished urban schools for the rest. In the meantime, more public money will flow into the coffers of his corporate friends running to the "rescue" of those poor kids "stuck" in their "government" schools.

And most citizens sit idly by and watch as their communities are led to the abyss.
Posted by David Britten at 06:00 No comments:

According to the Michigan Bulletin 1014 which provides detailed revenue and expenditure reports for all public school districts by school year since 1994, the following represents the short and sweet reality of per pupil funding through combined state and local sources (the most recent data is 2012):

However, had 1994's per pupil revenue at least kept up with inflation with no other legislated increases, the 2012 combined state and local revenue should have been $10,153 per pupil.

Instead of at a minimum keeping up with rising costs for operating schools, Michigan's legislature over the past eighteen years has chosen to effectively reduce public school funding in real dollars by nearly $2,000 per student.

Regardless of the Governor's claims, the pattern has continued this year. 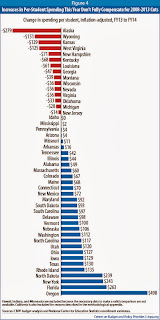 Posted by David Britten at 13:51 No comments: