The Main Reason Standardized Curriculum, Teaching and Testing Must be Shown the Door 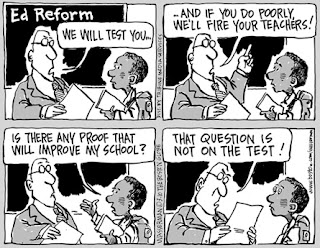 Yet, we still base student learning and school success on a proven faulty, test-based system. Why?


Researchers, statisticians, and academics of every stripe have called for an end to high stakes testing in education policy. Parents, students and teachers have written letters, testified before congressional committees, protested in the streets, even refused to take or give the tests. All to deaf ears.

The federal government still requires all students in 3-8th grade and once in high school to take standardized tests.

But these assessments are graded on a curve. A certain amount of students are at the bottom, a certain amount are at the top, and most are clustered in the middle. This would be true if you were testing all geniuses or all people with traumatic brain injuries.

It doesn’t matter how smart your test takers are. There will always be this bell curve distribution. That’s how the tests are designed. So to talk about raising test scores is nonsensical. You can raise scores at school A or School B, but the total set of all test takers will always be the same. And some students will always fail.

But that isn’t even the worst part.

If you want to open your eyes and learn more about the inequity of racism and its impact on public school funding and education in general, I highly recommend you hunker down this weekend and read  FERTILIZERS, PILLS AND & MAGNETIC STRIPS: THE FA'l'E OF PUBLIC EDUCA'l'ION IN AMERICA by Gene Glass, 2008.  It's available for the Kindle which means you can start reading right away.


Glass shows how the central education policy debates at the start of the 21st century (vouchers, charter schools, tax credits, high-stakes testing, bilingual education) are actually about two underlying issues: how can the costs of public education be cut, and how can the education of the White middle-class be "quasi-privatized" at public expense? Working from the demographic realities of the past thirty years, he projects a challenging and disturbing future for public education in America. - Retrieved from http://www.infoagepub.com/products/Fertilizers-Pills-Magnetic-Strips

In his longest chapter (10), Glass documents how current reform efforts (i.e., vouchers, charter schools, and tuition tax credits) systematically discriminate against minorities, while US schools are more segregated than before Brown v. Board of Education. He also challenges the view that schools are "failing," and summarizes critiques of high-stakes, standardized testing. Glass's historical perspective and his review of evidence supporting his position are impressive. He rejects simple solutions to public education's endemic problems, but hopes that in the long run Americans' love of justice will prevail over the selfish interests of the graying, currently dominant majority. ~ G. E. Hein emeritus, Lesley University 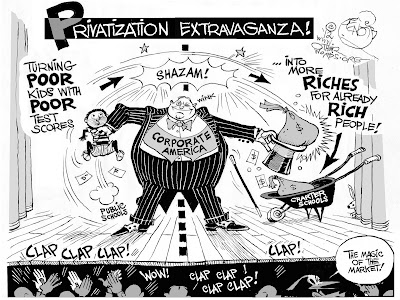 Posted by David Britten at 07:05 No comments: Links to this post

Nearly a decade after the recession, school funding in many states hasn't recovered


Nearly 10 years after the recession, school funding is still way down in some states. That's according to a new report released Thursday by the Center on Budget and Policy Priorities.

Michigan's State Board of Education and Superintendent have called for the state to be in the "Top 10 in 10," but since one's wallet usually reflects your priorities it's clear that our state legislature and governor have different goals in mind for public education.

Funding for public K-12 education in Michigan is down 11.2% in comparison to 2008 when adjusted for inflation (i.e., the cost of running a school). Of course we know that our state legislature sorely underfunds public schools and has done so rather intentionally over the past nine years. Class sizes are up, schools have been closed, classrooms go without needed textbooks, technology and replacements for outdated equipment (especially in critical STEM courses). Teachers go without professional training and coaching to keep up with the maddening changes in state-mandated curriculum and testing. 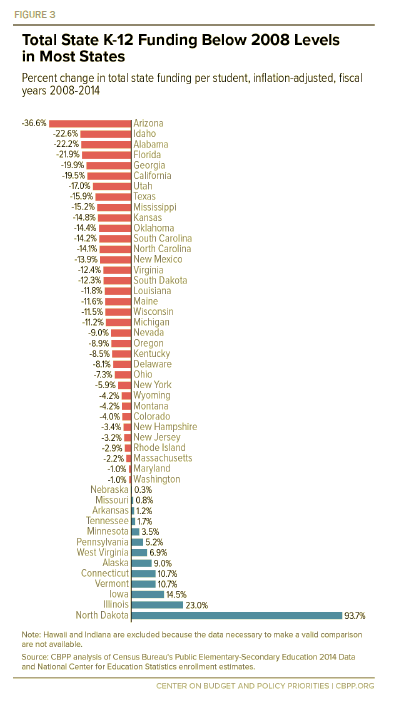 Michigan commissioned a study on our public school funding and the results released three months late this past June were telling, if not horrific, regarding how underfunded our schools are when it comes to providing every child an adequate and equitable education. Although the study came up short because it failed to include recommendations for ensuring special education students are properly funded, and did not even address other structures that impact student learning, such as size of the district/school, rural versus suburban and city schools, or varying costs in hiring highly qualified teachers in different parts of the state, it did come out and recommend an immediate increase in the minimum foundation allowance to $8,667 just to get to the low threshold of "adequacy." For most Michigan schools, that's an increase of $1,100 per student.

But that's just the beginning if Michigan is serious about ensuring EVERY child has an equitable opportunity to complete the 13-year public education race despite the many setbacks that force a substantial number of students to begin that race from way behind the starting line. Students in poverty, many of which are attending schools in high-poverty neighborhoods, or those children with other state-defined, at-risk attributes REQUIRE a minimum of 30% more in per-pupil funding from the state just to run a fair race and have a chance to compete with their more affluent peers. Other students who may come from non-English-speaking homes and have limited-English reading, writing and/or speaking skills require at least 40% additional funding according to the study.  Read Report: At-risk students need more Michigan funding.

As you can see from the chart below, the impact of declining per-pupil foundation funding by the state, which took over responsibility all school operating funding more than twenty years ago, has been devastating for our district while at the same time we've wrestled with an increasingly low-income (95% FRL and 38% Federal Poverty) and English learner (43%) student population. The value of $1 in state aid provided in 1995 is now capable of only purchasing 63 cents worth of services, supplies, materials, equipment, utilities, etc. owing to the rate of inflation.

Consequently, just to keep up with inflation, our district would require a foundation allowance of $8,500 per pupil, which is just shy ($167) of the "adequacy" recommendation by the school finance study released in June. But as you can see from the chart below, we're not even close to "adequate" and certainly "equity" as proposed by the study's recommendations is not even addressed by our state. This has resulted in larger class sizes despite a high at-risk population, less resources and availability of higher level courses, less time away from the classroom for teachers to engage in professional learning and collaborative work, textbooks and other support materials that are eight or more years old, difficulties maintaining basic instructional and support facilities, less opportunities for enrichment as well as addressing learning gaps across our curriculum, and less competitive salaries to ensure we attract and maintain a high quality faculty and administration. 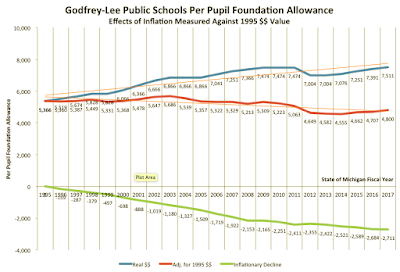 We hear a lot of high and mighty talk about how we in Michigan are going to reform our public education system once and for all, becoming that top ten state within ten years. But for the most part it is bark without bite because adequacy and equity in school finance is not at the top of the priority list. The latest effort is Governor Rick Snyder's Michigan 21st Century Education Commission which no doubt will "consider" school funding in the mix, but like most reports over the Governor's tenure to-date, will bury those recommendations under a mountain of higher curriculum expectations, more intrusive (and abusive) narrow testing and faulty use of that data, more time in classroom seats (proven only to improve test prep and not actual learning), higher quality teacher prep programs (which will be a waste of time unless we are able to attract more teachers into the profession), etc. In other words, more "sticks" than "carrots" despite the growing evidence that Michigan intentionally starves our public education system.

Posted by David Britten at 07:15 No comments: Links to this post

Another Day, Another Misguided Discussion in Lansing About High-Stakes Testing

Continuously changing narrow, high-stakes testing of content that's mainly forgotten three months later makes absolutely no sense, and is simply pandering to those who advocate for education reforms that are harmful to student learning and focused on the industrial model of schooling.

What we need are localized assessments focused on 21st century learning skills (6Cs, etc) that are designed around showing what one has learned (not knowing short-term memorized content) by doing, exhibiting, making, and creating.

Tell your state senator and representative that enough is enough. Lansing needs to back off. They've done more than enough damage already.

Learn more about how and why schools should redesign learning and assessment through the documentary film, Most Likely to Succeed. If you haven't yet, bring a viewing to your district and/or community. It provides a great discussion starter for how to break the bonds from our industrial-age school model and provide learning spaces and activities that benefit our 21st century students.
Posted by David Britten at 09:39 No comments: Links to this post