Understanding why we needed "Kelsey's Law" 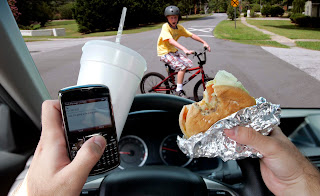 Try not to be distracted while you read this.

Yesterday, "Kelsey's Law" went into effect in Michigan.  The law bans teen drivers from using their cell phones while driving. As with most every governmental restrictions on freedom, it's being hotly debated and called into question as to whether it can even be enforced or whether it focuses  enough on all of the distractions confronting drivers, regardless of age.

For those who want to intelligently debate driver distraction, I encourage you to read Daniel Kahneman's Thinking, Fast and Slow, a rather lengthy but interesting tome on how two systems within the mind drive (no pun intended) the way we think. Even if you only read part one of the book, you'll get a better understanding of what a distraction really is and how we either ignore or respond to one.

Kahneman, a Nobel prize winner in economics, talks about two systems in the brain that drive our thinking, simply called System 1 and System 2. Without getting too deep into Kahneman's work, "System 1 is fast, intuitive, and emotional; System 2 is slower, more deliberate, and more logical." The two systems work in tandem but also can work against each other depending on the situation.

Returning to Kelsey's Law, System 1 thinking, which "operates automatically and quickly, with little or no effort and no sense of voluntary control," is the type of thinking and response that is adapted over time and with much practice.  As drivers become more adept to handling an automobile or larger vehicle, most of their responses to routine road conditions are automatic, without deep thinking processes. Even younger drivers start to use System 1 thinking when handling a vehicle on an empty road or one they've driven over many times before. This is one of the reasons when backing out of our driveway we run over kids' bikes and toys (and tragically, sometimes kids themselves) because we rarely think about what we are doing during this routine process. System 1 is in control.

On the other hand, when road conditions are more difficult, with heavy traffic, slippery or poor surfaces, low visibility, or unfamiliar surroundings, System 1 cannot usually handle the driving requiring more strenuous System 2 thinking and problem solving. Kahneman claims, "The highly diverse operations of System 2 have one feature in common: they require attention and are disrupted when attention is drawn away." He provides a list of activities that require System 2 thinking but in all of them, you are required to "pay attention, and you will perform less well, or not at all, if you are not ready or if your attention is directed inappropriately."

For young drivers, motoring around town or on a busy highway requires a higher level of undistracted System 2 thinking. This is also the case for more experienced drivers depending on the conditions under which they are driving. But conversation by cell phone or with passengers, searching for a radio station, fumbling with your GPS, trying to read a map, or reaching to attend to a child in the rear seat also require varying degrees of System 2 thinking. Even eating and drinking in a manner you are not accustomed to in the comfort of your home requires a higher level of System 2 thinking to avoid ending up with hot coffee in your lap or ketchup on your tie.

The problem is, the mind can only deal with one System 2 problem at a time (this alone debunks any theory of multi-tasking). That means the car pulling out in your path in front of you might get short shrift in your attention and and ability to react timely and appropriately. Same as the sharp turn up ahead on an unfamiliar road, or the fact that you're gradually veering across the center line. Cell phone conversations require even more System 2 thinking than standing in a room talking face-to-face with someone. Communications requires more than simply hearing words. If you're used to using body language and visualizing what the other person is saying (if in fact you're even paying attention which requires even more System 2 energy), you're mind will try to do the same thing while listening to a conversation over the phone. Thus, with your System 2 thinking totally preoccupied with trying to engage in conversation, only your System 1 thinking is keeping you from the edge of oblivion, and that level of thinking, according to Kahneman, will only work with practiced or situations that are similar to learned associations.

Cell phone distraction is only a part of the problem on today's crowded, angry streets. But Kelsey's Law is a start, even if it only brings more attention (System 2 thinking) to the problem. There are many other, and older, forms of distraction including those outside of the vehicle such as commercial signage and more complicated road networks. Until we address distraction in general beginning with all of us understanding better how the mind works, we'll only continue to witness the tragedy on our roads.

Posted by David Britten at 08:08 No comments: Links to this post 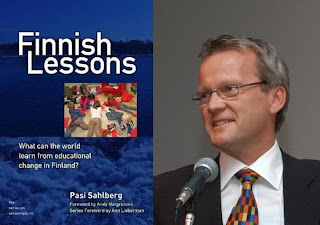 "'I am not here to compare or compete in education, I am here to share some of the experiences we have had,' Sahlberg said. 'I wouldn't be here and Finland wouldn't be there unless we had been so carefully learning from what had been happening during the last one hundred years in this country.'

"Sahlberg sees many countries trying to use GERM, the Global Educational Reform Movement, to improve their public schools. The four components of GERM are competition, standardization, test-based accountability and choice, which he says end up hurting the education systems in the long run.

"'If the elements of GERM were a good idea, I think there would be at least one country in the world that would show by doing this, things would improve,' Sahlberg said. 'But there is nothing. Not a single successful example of a country that has relied on GERM.'

"His response to the GERM infection is the 'Finnish Way,' which is how Finland has been implementing educational changes over the past 40 years.

"'Everybody in high school, 100 percent of our kids, have a personalized learning plan,' he said. 'And we have been trying to enhance equity in the education system, which means everybody should be successful in the school system regardless of where they come from.'

"Sahlberg provides his three steps for better education: taking equity more seriously, spending less time in the classroom and improving the professionalism of the teachers."

So, what Dr. Sahlberg's saying is:
1. The U.S. decentralized education system is the model that was used by the Fins to improve their system.
2. Reform centered on high-stakes testing doesn't work.
3. Opening more schools in an attempt to create a market-place approach to public education isn't the answer. Nor are closing schools or firing teachers ala Michelle Rhee.
4. Equity of opportunity is the foundation for an individualized education system that supports achievement for all despite the conditions they live in or the background they come from (in Finland, all schools are funded the same).
5. Putting more resources into improving teacher professionalism is important, not cutting school revenues so drastically that schools are forced to reduce staffing, salaries, and professional development.
6. True education reform takes time (40 years and counting for the Fins) and cannot be done in a year (or less than a year for the supporters of the EAA model in Michigan), a few years or even a decade.
I'm betting Dr. Sahlberg is not a member of ALEC, doesn't subscribe to any of the Mackinac Center publications, and doesn't reside anywhere near Ada, Michigan. That would imply that he "knows nothing" about education reform. At least that's what they probably think in Lansing.
Posted by David Britten at 07:27 No comments: Links to this post