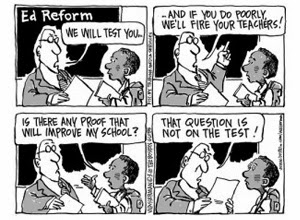 Kids today don't go to school in the same sense their parents and grandparents did. They go to "test factories" to produce data that politicians and reformers can use to label them and their schools as failing. This in turn allows the politicians to divert billions of dollars to their friends in the corporate sector to run their schools (into the ground) and sell them all kinds of new resources and support to allegedly help them turn their schools around. That is the 21st Century cycle of education. It's not about the learning anymore, at least from the non-educators' standpoint. It's about the almighty $$.
Posted by David Britten at 06:40 No comments: Links to this post

From research reported in the AASA Journal of Scholarship & Practice (Fall 2013):


In accord with the research on the effects of
socioeconomic status on school achievement,
eligibility for free lunch accounted for the
greatest amount of variance in achievement on
both NJ ASK 5 Math and LAL scores.
Beginning with Coleman (1966), SES was
identified as the greatest predictor of student
achievement. In a meta-analysis conducted
with research dating from 1990-2000, Sirin
(2005) found that socioeconomic status
remains, at minimum, a moderate to strong
predictor of achievement.

This fact should be the ultimate basis of
any education reform. Policymakers who
would like to believe that external mandates
such as better qualified teachers, merit pay,
charter schools, performance pay, smaller
schools, vouchers, etc. are stronger predictors
of achievement must revisit the research. The
difference in test scores between SES groups is
due to SES itself. Mandates targeted at poverty
itself will likely have more of an influence on
achievement than any other variable(s).

www.aasa.org/uploadedFiles/Publications/JPS-Fall2013.FINALv2.pdf
Posted by David Britten at 17:02 No comments: Links to this post

Our district received it's state school aid payment today. The status report that accompanies the payment reminded us that in FY 1995, our foundation allowance per pupil was $5,365. Had this simply kept up with inflation, our current foundation allowance (according to the Bureau of Labor and Statistics) would be $8,234.

This year, owing to a very modest increase (before the state recoups the higher costs of a retirement system it's policies are bankrupting), our foundation allowance is $7,064, which is $410 lower per pupil than it was before Governor Snyder took the reins. That amortizes out to an average reduction the past three years of $450 per student, or approximately $828,750 less in general fund revenue each year to operate our classrooms and schools (without even considering the inflation rate).

No doubt we'll keep hearing Governor Snyder expound on how he thinks he has poured billions into public schools since taking office. Unfortunately, he resides in an alternate universe far removed from the realities of struggling public schools.
Posted by David Britten at 14:57 No comments: Links to this post

The following is satire. Or is it?

It has been determined that our students are not responsible enough to allow for social-networking tools in the classroom. That was demonstrated by the inappropriate use of Twitter yesterday, coupled with frustration expressed by teachers on Facebook (no irony here). It seems that they are concerned about being unable to effectively manage their respective classrooms given the chance the additional technology tools might be misused by students who have not been taught their value or appropriate behavior. Thus the need to eliminate this learning tool and by logical extension, review the potential or actual problems with other learning tools in the classroom.

Since historically students have also misused paper in the classroom to write personal notes, draw inappropriate pictures of their teachers, express themselves using inappropriate language, create spitballs, or simply wad it up and throw it at each other, beginning today we will block students from using paper for any school-related activities. This will not only prevent misuse but will relieve teachers of any responsibility to effectively manage the use of paper in their rooms.

Since pencils, pens, markers, crayons, etc., without the presence of paper to employ them, might now only be a temptation to students to misuse these 19th century technological wonders, they will no longer be allowed in classrooms. This will effectively end the district’s innovative 1:1-BYOD policy of students bringing their own writing-drawing tools coupled with the teacher periodically providing them to those without. There may be other learning tools that need to be “blocked” as well such as the use of clay in art classes. We all know that students can wander "off task" while using clay resulting in an inappropriate object being formed. This usually leads to a lot of giggling or gasps disrupting the flow of learning. This is very difficult for the classroom teacher to monitor. While he/she is correcting one student, others working behind her may be off task in their respective creations.

Textbooks and reading materials are another potential distraction for students allowing their minds to drift off, hide other activities they might be engage in at their desks, or the ever-dreaded “reading ahead” instead of staying with the class or focusing on today’s assignment only. Therefore, it seems logical that we ban books from the classroom since it is far too difficult for any one teacher to ensure students are locked onto the required reading or book assignment. Once again, this will relieve the teacher of time-wasting classroom management activities and allow for more teaching and learning in the classroom.

It appears that the safest, most efficient classroom is one where only conversation is allowed as long as it is managed in such a way as only one person is speaking at a time. Therefore, effective today, we shall return to the pre-1900’s when oral recitation was at the center of teaching and learning, and all other learning tools put away as to prevent those unneeded distractions and time-wasting classroom management activities.

The Superintendent
Posted by David Britten at 07:16 No comments: Links to this post