Measuring students' success based on how well they do in an academic test is superficial. It ignores the deeper learning that will actually help them thrive. Education policymakers' obsession with test scores...is in part motivated by their own desire -- need -- to 'prove' the success of their policies....But the price children pay is relentless drilling and the neglect of unquantifiable skills that are actually -- and increasingly -- more important. Worse, if you examine the tests forensically, they fail even on their own terms. (pp. 49-50) 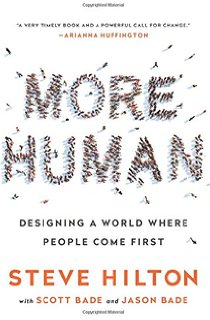 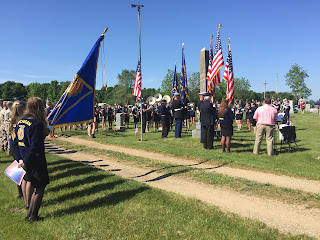 Good morning. I feel honored to be here at this peaceful site, on the start of a day we dedicate each year to remember those who paid the ultimate sacrifice, so that all across this nation in every city and town just like this we continue to enjoy freedom.

It’s difficult to come up with the right words on occasions such as this, for those we honor lived lives more significant than any speech. The late President James Garfield, then a U.S. Congressman, said in 1868 at Arlington National Cemetery, their “death was a poem, the music of which can never be sung.”

For you see, much of what we pause to reflect about today, most of us have never experienced. We can never know what went through the minds of all those soldiers, sailors, airmen or marines. Nor can we possibly relate to what their families and close friends endured once they received the horrible news.

Like you, I’ve given or listened to many Memorial Day speeches over my lifetime, most of which fall short of personalizing the sacrifices that were made; the terror that was experienced; the young lives that were cut short. We tend to wrap everything up in a nice, clean patriotic glow, forgetting that most of those lives lost once belonged to families and communities like this one. The names are engraved on monuments and tombstones, but none of those do a very good job of reminding us who these young people were; let alone what they might have been had their lives not been taken in their prime.

Several years ago at a Memorial Day program up in Wyoming, I told the story of 27 young boys from my school district who perished in three separate wars. It was the first time I had made such personal connections, and I dare say the audience that rainy evening experienced much the same.

The Vietnam War was the last time that so many combat deaths and missing in action touched nearly every community across this country:  58,307 deaths and another 1,620 still missing today. Those numbers tell us the magnitude but don’t begin to speak for the individuals they represent. You see, it’s more important than simply waving flags that we reflect on the real memories of who they once were; that their stories of life, courage, fear and sacrifice live on from generation to generation.

One such soldier was your own Second Lieutenant James Earl Parmelee, United States Marine Corps. Born a couple months before Pearl Harbor to Russell and Helen Parmelee, James attended and graduated from Hopkins High School, where of course he played on the football team amongst other distinctions. He continued his education and football days at Wheaton College in Illinois, where he made the decision to enlist in the Marine Reserves. Parmelee graduated from Wheaton in 1964 with a major in Political Science, and following three years in the reserves, he entered on active duty.

Now a 2nd lieutenant, young James headed to Vietnam and was part of the 3rd Marine Division that landed at Da Nang in April of 1965. From there, Parmelee’s battalion found itself in the midst of Viet Cong territory, where on July 14th he was killed during combat action by a friendly misfire of a heavy mortar round, that also took the life of one of his sergeants.

Lieutenant Parmelee, not quite 25 years old at the time of his death, is listed on various rolls of honor as having been single at the time, but besides his family back here in Hopkins, he left behind a fiancée, Ruth Elizabeth Bergman. They had been planning to marry during the summer of 1966 following her graduation from Wheaton. It was not to be. 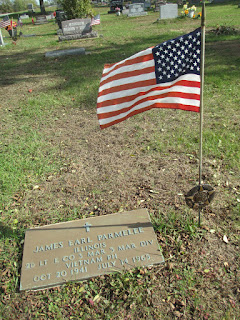 Instead, Lieutenant Parmelee rests in this cemetery and his name is inscribed on a monument in town.  But the details of his life are inscribed only on those who knew him.

There have been hundreds of thousands of men and women, just like James.  Just like the 27 men from Lee High School.  Each has a story of everyday lives cut short by the call to defend freedom. If we could speak to them today, they most likely would tell us to remember them not as heroes, but simply as young men and women who grew up in cities and towns just like you and I did, and just as our children and grandchildren do today.

They laughed, they cried, they pursued adventures, got into their share of trouble from time to time, hung out in town, played in nearby woods and streams, enjoyed just being with friends, and no doubt experienced the occasional romance.

All were typical teenagers and young adults, caught in very atypical times. The call of duty was strong and each responded, whether they enlisted or were drafted, but if they could, they most certainly would have chose a different outcome.

It’s now left to us to honor their sacrifice, but most importantly to do our best to remember them for whom they once were.

I saw a meme on Facebook yesterday that said it most succinctly: “We don’t know them all, but we certainly owe them all.” 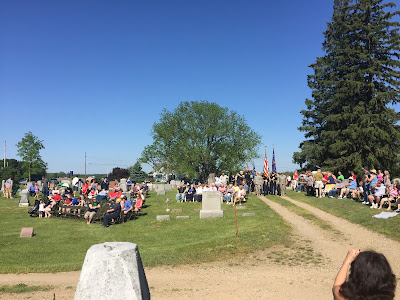 Posted by David Britten at 11:32 No comments: Links to this post

The important question no one has yet asked is whether the results of this panel will have any staying power in the coming years and decades? Or will it just be another target of political whims in our broken political system created by term limits and gerrymandering?
Without staying power, the time and money put into this process will be a waste.
And if all it does it focus on wrongheaded policies such as mandatory testing, school rankings, teacher evaluation, or expanding corporate charters, they should simply quit before they start.
http://www.grbj.com/articles/85365-snyder-names-west-michigan-leaders-to-21st-century-education-commission
Posted by David Britten at 09:09 No comments: Links to this post

Amber Arellano of EdTrust-Midwest is highly critical of Michigan's public schools and heralds Massachusetts as an example of what works. What she conveniently ignores, because it goes against the grain of her wealthy financial backers, is that Massachusetts actually funds their schools while Michigan has been starving public school kids since 2008.

Posted by David Britten at 06:32 No comments: Links to this post

So here's a conceivable scenario for the future if radical legislators and corporate hacks continue pushing charters on a public that chooses to remain ignorant of the problem:
1. Traditional public schools will disappear because a dual tax-supported system is not sustainable over time.
2. Corporations that run charters will open and close them at will, shutting them down entirely in areas where the profit margins are low.
3. As corporate-run charters become a majority of schools, corporations will demand more public dollars to compete in the marketplace and will use political money and power to force state legislature's hands.
4. Like runaway college and university costs, the demand for entrance by the "average student" will force costs at corporate charters and private schools to skyrocket.
5. Legislation will materialize to allow corporate charters to charge a variety of fees and possibly tuition to keep up with rising costs and greater demand; by now the traditional public school system will pretty much have disappeared due to bankruptcies and apathy.
6. The percentage of children uneducated in formal school settings will skyrocket due to their local schools having closed and inability of the corporate charter system to expand to meet 100% of the non-private-school demand.
7. I'll let you fill in the consequences to our society from this point on.
Posted by David Britten at 20:40 No comments: Links to this post