What "Kids Count in Michigan" Missed 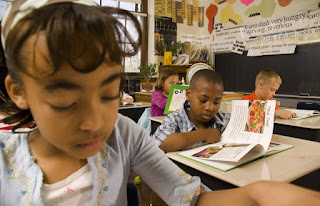 More children lived in poor or low-income families. By 2011 over half a million children in the state lived in families with income below the poverty level ($18,000 for a single-parent family of three and $23,000 for a two-parent family of four). Between 2005 and 2010 the child poverty rate escalated from 18 percent to 23 percent. Relatively high unemployment and eroding wages weakened financial security in Michigan families. Yet the state has responded by shortening the period for unemployment benefits, drastically cutting the state Earned Income Tax Credit, restricting access to the major federal nutrition assistance program for families by implementing state-based asset limits for participation and imposing lifetime limits on cash assistance for previously exempt single-parent families with children. ~ Kids Count in Michigan Data Book 2012, Executive Summary, page 2

What the study should have included but didn't were the continuing state funding cuts to K-12 public schools, and further dilution of available school aid funds to support unproven corporate charters and cyber schools, both actions hurting urban poor and minority students the most.

Especially when you combine it with one of the nation's least equitable school funding systems in the country (National Report Card)
Posted by David Britten at 09:27 No comments: Links to this post


I realize I do not reside in your district nor is my school district located there, but I wanted to pass along my gratitude for your courage in proposing a joint resolution to "require that all local school districts receive the same amount of total state and local per pupil revenue for school operating purposes." I believe that Chris Andrews from The Bridge Magazine expressed it very well today when he wrote, "David Arsen, professor of educational administration at MSU, said the state's first funding priority should be for an inflation adjustment to the per-pupil grant, something that hasn't happened in several years. He said the cuts over the past several years have reduced the quality of education that Michigan students receive." ~ How does Michigan rank on spending for K-12 schools?, Mlive.com.


I hope that others in the state legislature and Governor Snyder himself would sign on to your initiative to raise the equality of funding for Michigan's public school system, but at the same time, I encourage you and others to look beyond equality to a more meaningful measure of equity that ensures our urban, low-income, special needs, and ELL students have the same advantages, material supports, quality teaching and other necessities to compete with their suburban and more affluent peers. I would like to suggest that Michigan undertake a study similar to one by APA Consulting that costed out public K-12 education in Pennsylvania not too long ago (emphasis added 1/3/15). It used an extensive process to set an equitable funding level based on the needs of particular students. This makes much more sense than Michigan's current funding formula that doesn't take into account that every child in every public school district is being held to the same academic standards regardless of financial resources available to support him or her along their quest.


The Pennsylvania study is available on the APA Consulting website at http://www.apaconsulting.net/reports.php. I encourage you, your staff, and fellow Senators to review it and consider a similar study in Michigan.


Thank you again for your support of public education. On a side note, one of our most esteemed alumni, Deb Traxinger, is a science teacher at Grand Ledge High School. Deb was a standout basketball player at Lee High School and Michigan State University.


I hope you don't mind but I have forwarded a copy of this letter to Senator Mark Jansen who represents our district.


Posted by David Britten at 14:05 No comments: Links to this post

Michigan's new legislative session is likely to pick up where it left off with unproven school reform measures that turn declining public dollars into profits for corporations. It's an excellent time to revisit one of my favorite blog posts from 2012 by Anthony Cody.

Here's a summary from his recent post, Favorite Posts of 2012: Deepening the Dialogue, but I encourage you to go to the original and read it in it's entirety:

Choice in education is an illusion. In some cases it allows a lucky few access to a better school. But those seeking profit rarely want a level playing field - they seek whatever advantages they can get, and often that means leaving behind the special education student and the English learner.

As a parent, I was not only concerned about my own sons. I wanted the best education possible for all the children of our community. The public schools were a legacy handed to us by generations before that built them. It is our challenge to rebuild them into places that fulfill that now tarnished ideal, to educate everyone well. It is critically important that institutions such as our schools be driven not by decisions based on what is most profitable, but instead by our interest in the common good, and by our commitment to providing excellent opportunities for every child, even when this is unprofitable.

In the process by which decisions are being made about our schools, private companies with a vested interest in advancing profitable solutions have become ever more influential. The Gates Foundation has tied the future of American education to the capacity of the marketplace to raise all boats, but the poor are being left in leaky dinghies.

Neither the scourge of high stakes tests nor the false choices offered by charter schools, real or virtual, will serve to improve our schools. Solutions are to be found in rebuilding our local schools, recommitting to the social compact that says, in this community we care for all our children, and we do not leave their fate to chance, to a lottery for scarce slots. We have the wealth in this nation to give every child a high quality education, if that is what we decide to do. With the money we spent on the Bush tax cuts for millionaires in one month we could hire 72,000 more teachers for a year. It is all about our priorities.

Posted by David Britten at 09:43 No comments: Links to this post

Thank Goodness Plumbing is not on the ACT! 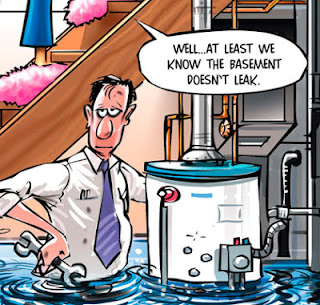 I have absolutely no doubt that if you gave me a high-stakes standardized test in plumbing, I would fail.  Hands down.  In the eyes of some folks, especially those who believe that students should be repositories for vast volumes of knowledge readily available to spit out on the ACT, SAT or some other manufactured bubble test, I would be a failure because when it comes to industry standards for residential plumbing, I know squat.

That's probably why my spouse encouraged me to call a professional plumber when mysterious growling noises started coming from the pipes of our home earlier last fall. Flush the toilet, and as the tank refilled it soon sounded like we just woke up some ornery old man next door. Same when we turned off the shower or the washing machine was filling up. We've lived here since 1984 but this had become a recent phenomena.

As I usually do when faced with a puzzling new problem, I procrastinated. Well, not totally. I did use Google to search for others with the same problem but the solutions served more as band-aids and the growling soon returned. I had zilch for a knowledge base and so I guess I could be labeled as a failure. I could see it in my mind: A multiple-choice question on groaning pipes with four possible solutions. Sigh! I would suck.

Eventually, I shut off the water and we took off on a Caribbean cruise far away from our noisy plumbing. Out of sight (hearing) out of mind. But in the back of my mind I knew that when we got home around Christmas, I'd be left to face my failure and give in to hiring an expensive plumber.

I procrastinated a few more days (plumbers are even more expensive on holidays). Then, instead of making the call, I Googled it one more time and there in front of me were no less than two YouTube videos not only helping me to pinpoint the problem but also illustrating the steps I needed to take to permanently fix it. I always like it when explanations go beyond the fix and include an explanation in terms I understand (pictures help, too) why it became a problem in the first place. You just can't beat a little theory with practical application.

The solution took one trip to the hardware, $20 in parts, and no more than forty-five minutes to do the repairs. No more growling pipes and best of all, no expensive plumber bill.

My point is that in the end I wasn't a failure because I exercised the most valuable skills I ever learned in school: (1) don't give up and learn from your failures, (2) it doesn't matter if you haven't learned everything, as long as you have learned how to learn, and (3) narrow-focused bubble tests may be amusing (and profitable) to the political and corporate education reformers, but they mean little with regards to what it actually means to have learned.

In the end, I didn't fail. That's more important than passing a bubble test.

Posted by David Britten at 10:14 2 comments: Links to this post