Natural learning the way it was meant to be 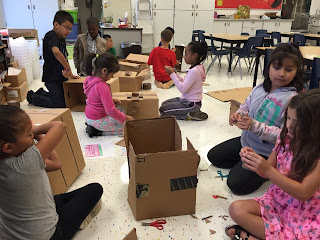 Last week was the culmination of a six-week project centered on the learning concept of the Cardboard Challenge by the Imagination Foundation. Several teachers and the principal at our early childhood center combined with our district technology integration specialist to devise a school-wide learning activity that captured the imagination of over four hundred five, six and seven year-olds. Joining them was one of our Spanish teachers at the middle and high school along with dozens of her students. They came weekly to lend a technical hand to their younger friends while at the same time, learning from the unfettered creativeness of younger children. 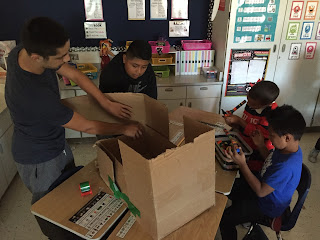 This is what real life learning is all about.  While some of the goals of these projects were uniform, how each child visualized and created his or her "sculpture" or "working machine" was left up to them. The school was transformed into a marketplace of ideas and a system where the fledgling talents of these young children combined with the technical skills of their older partners to create something that had meaning for both. Not all of the classes enjoyed the mixed-age partnership but the first grade class that did may have ignited a new passion for learning in our schools. Time will tell where that goes. 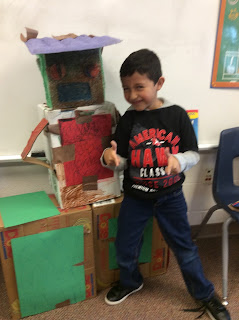 Peter Gray in his seminal book, "Free to Learn," claims that children learn best on their own initiative, through their own self-chose and self-directed means. Most of what I observed in art class periods and during the weekly mixed-age work sessions was based on those premises. Each child got to decide for themselves what they wanted to create from simple cardboard. They chose from discarded boxes and scraps the materials they needed to achieve their respective vision. They used the tools necessary to cut, shape and support their 3-D model or working machine. Trials often led to failure and new ideas formed. "It needs more tape," or "I think I'll try this," were commonly heard. In the case of the classroom working with older students, their heads were together as they collaborated on a specific "carnival game" (this group of students were attempting to recreate Caine's Arcade) and worked as a team on each step of its creation. The adults stepped in only when asked or if they wished to offer a suggestion, which was rare. The kids were given the time and space to play and explore with their creations. Skills like responsibility and self-direction were evident. 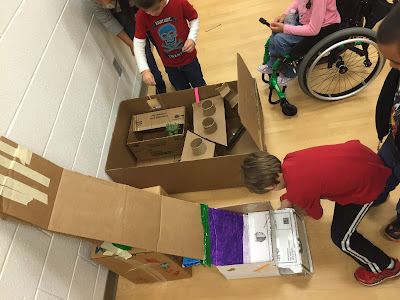 During the culminating event held last Friday, all of the students throughout the school had a chance to display their creations for parents, visitors, staff and fellow students who toured each classroom during the afternoon. They described their 3-D sculpture or arcade machine and answered questions about why they chose what they did and how they constructed it. As with most young children, it took some imagination to see what they saw in their creation but isn't that what creativity is centered on? The fledgling and often rough ideas of a youngster come to life. We all remember the great times we had with the boxes our Christmas and/or birthday gifts came in. We might have called that big refrigerator box a spaceship, even though it took some real imagination on the part of our parents to think of it as something that would travel in outer space. That didn't make it any less than what we kids thought it was. 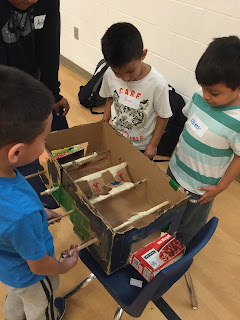 As the final event, all of the kids in the school as well as parents and staff had an opportunity to play the carnival games created by the 1st graders and their middle/high school partners. There was everything from skeeball to foosball, from fishing games to bop-a-mole with hundreds of youngsters having fun while the creators of these arcade pieces looked on with pride. You can't create that same experience in a traditional academic lesson. 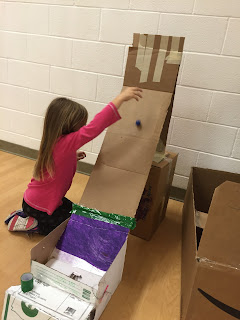 There was something missing throughout the weeks-long Cardboard Challenge at the Early Childhood Center: there were no written assignments, quizzes or high-stakes tests to interfere with real learning. The staff removed the pressures to perform at a high level (which naturally interferes with real learning) and to be as creative as they wished (which under pressure would actually interfere with creativity or innovation). They created learning spaces where these young students were free to exchange ideas and work as part of a democratic community as they brought their vision to life. Empathy skills, something that cannot be adequately taught in a typical teacher-led lesson, were reinforced as older students mixed with their younger partners and avoided evaluating or criticizing what they were creating. They encouraged their young friends and modeled the type of collaborative behaviors we want our students to grow up with. 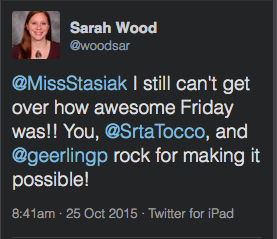 No standardized test will adequately capture what went on during the ECC's Cardboard Challenge and no common core curriculum can ensure that each child has the opportunity to build on their own unique strengths and capture their dreams with a simple cardboard box. But there was plenty of learning along the seven survival skills that Tony Wagner and Ted Dintersmith list in their book, Most Likely to Succeed: Preparing our Kids for the Innovation Era, a companion book to the incredible documentary film by the same name produced by Dintersmith that's currently sweeping the country in hundreds of locales:

For another perspective on this learning activity by a first grade teacher, read her post on her blog In the Mitten with Miss Stasiak titled Cardboard Challenge 2015.
Posted by David Britten at 07:56 No comments: Links to this post

Our current school structure and policy ignores readiness to learn

Because I couldn't say it any better, although I have tried on many occasions and still keep trying:

Many of us in formal learning situations are on a lockstep treadmill. It is indifferent to our needs, to our circumstances, and to our preferences and what we have to contribute to others.

Because it is efficient to teach in groups, we are bunched by combinations of age, required (not desired) subjects, testing, time, and space allotments. All of these ways of grouping are likely to be unresponsive to our readiness (or the lack of it) to learn. 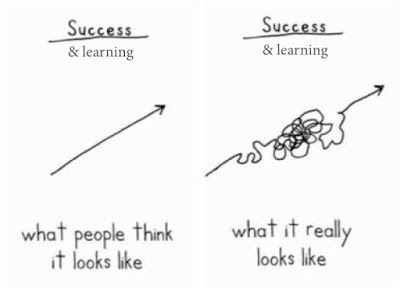 Learning does not proceed in a straight line. It cannot be organized and disseminated uniformly to groups. It is not a systematic stratification of facts and schemata to be regurgitated at appointed times.

One does not learn by surrendering to an established order but by discovering new orders in connection with individual experience. It happens in fits and starts. It is driven by questions generated by a learner's desire to know. It makes early leaps in one individual while stumping the next, only to be leapfrogged by the stumped one when he or she finally 'gets it' on a whole new level.

To herd learning into an appointed linear path and into a uniform conclusion is simply folly. This is common sense, yet we ignore it....It begins to suggest the unthinkable -- throwing the baby out with the bathwater.

It is important to recognize here that none of the continuing education reforms dictated by public policy and signed into law by 'education' governors, senators, and presidents addresses the underlying faults of traditional and institutionalized learning as addressed here. Until they do, we are 'rearranging deck chairs.'


Posted by David Britten at 10:58 No comments: Links to this post