"The findings of the Coleman Report transformed educational theory: Turns out that a child's life outside of school has a far greater impact than the school he or she attends.
"Those findings have been reconfirmed by countless studies over the past 48 years. Educators now recognize test scores are hugely influenced by sociodemographics, including household income, mother's educational attainment, and the child's neighborhood and social circle.
"School quality certainly matters, but largely on the margins. It also turns out that "school quality" is much more nuanced than the conventional wisdom assumes."

Shocking news said no one ever who has any substantial knowledge at all about how learning works and doesn't think of children merely as pets who will do any tricks for treats.
Posted by David Britten at 07:19 No comments: Links to this post

Yesterday, it was announced that West Michigan's Grand Valley State University was raising tuition by 2.9% (on top of the average 5.9% revenue increase provided earlier this spring by the state legislature and signed by Governor Snyder). The increase in tuition alone brings the annual tuition rate up to $10,752 per undergraduate student.

Thirteen years ago, my wife and I sent our son to our alma mater GVSU which that year had an annual (two semesters) tuition rate of $4,660. This of course doesn't include all the added fees, books, room-and-board, and other costs and by the time he graduated, tuition rates had already risen by 41%. Compared to that same year, the GVSU trustees just approved a rate for this fall that will be...wait for it, wait for it...131% higher than in 2001-02!

Now compare it to our K-12 public school district's foundation allowance, which one could argue is a similar funding source providing for core academic instruction and basic operations, although unlike postsecondary institutions like GVSU, public schools do not enjoy any control over how much this combined state and local funding will be each year. In 2001-02, the same year my son entered the hallowed halls of GVSU, our district received a foundation allowance of $6,666 (okay leave out the jokes about the end times, mark of the beast, etc). Following a severe per-pupil cut in the foundation allowance the year Governor Snyder came to office, despite the fact this key source of revenue already fails to keep up with the rate of inflation, our per-pupil revenue rate has now been set at $7,251 for this fall. That equates to a new level of per-pupil revenue that is merely 8.8% higher than thirteen years ago
Let me summarize.

GVSU, which is also benefiting to some degree by Governor Snyder's raid on the School Aid Fund that had been designed solely to support K-12 public education, has raised its annual tuition rate by 131%. At the same time, public schools like ours nearby have been expected to operate at a greater level of efficiency and provide a higher rate of college and career readiness while taking on more difficult curriculum standards and graduation requirements, working with a greater percentage of students who are struggling due to poverty, limited English proficiency, transiency, and a growing lack of parental support for learning, all while making due with an 8.8% increase in our foundation revenue.

To be fair, colleges and universities claim their revenues are not keeping up with costs. Oh, really? Try walking in the shoes of a K-12 public school administrator some time. That rationale doesn't seem to resonate with those folks in Lansing holding all the power and making all the decisions on school funding.

And then we wonder how to make sense of allegations that K-12 schools are not adequately preparing our charges for college?  At the same time, should we question if it make any difference if no one can afford to attend a four-year institution any longer?
Posted by David Britten at 07:05 No comments: Links to this post

Standing in the Way of Real, Meaningful Change

This is an update to my previous posts from awhile back about the need to radically alter our school systems.

The structure of today's K-12 schools was embedded in our national psychic well over a hundred years ago in response to industrialization and the rapid growth in manufacturing. We needed efficient, well-organized schools that could stem the growing chaos of our swelling cities, enhance productivity through basic skills for assembly-line and other low-paying jobs, model compliance as a virtue, select out a handful for higher education (management class), and serve as the bedrock for thousands of local communities. It was all about standardization through factory-model learning.

And while the occupations and industries of today and tomorrow have changed significantly in the past forty years, schools have not. They still retain the basic assembly-line structures that once were seen as necessary (even though they may have had an immoral foundation to them that ensured most students would be locked into their place within society's respective class structure, especially if they were poor or minorities), and no matter where you go, whether it be traditional public, charter or private, for the most part schools today resemble the same as those attended by our grandparents.

Aside from the fact that the results produced by schools today are now measured against a very different yardstick (ALL students graduating on time, college and career ready) then those from the first half of the twentieth century, the one basic structure that most hampers learning and contributes to the growing costs of education is the graded-school system. This is a system that says regardless of the "inputs" a student comes with to school, that student must progress through primary, elementary and secondary education based on age. So even though a student might enter the first grade in command of half the vocabulary of his peers, having rarely been read to in the first six years of life, and having virtually few out-of-school learning experiences due to his family's economic situation, that student is expected to magically catch up and progress to the next grade following the same number of days of instruction as her classmates.

Ridiculous? Yes. Here's an analogy (a poor one at best) to show you why it is ridiculous to use chronology to measure achievement. Suppose you and your cousin from the other side of the state decide to paint your homes which just happen to be approximately the same size.  But it turns out that your cousin (1) has more pre-existing knowledge and experience with painting a house, (2) has a higher income level that allows him to purchase high-quality, easier to spread paint, (3) has access to better equipment for painting, and (4) is enjoying better weather on that side of the state conducive to painting. Being from a competitive extended family, the pressure is on from everyone else to see which one (1) finishes the job on time (an arbitrary time set by all the "experts" in the family) and (2) does so with the highest quality (an arbitrary assessment of what a quality outcome looks like). All other factors being equal, your cousin easily "wins" even though eventually you too have a newly painted home that given the inputs could be considered a quality outcome. Doesn't matter though. You're a loser and that's that.

My point is that students do not come to school with the same backgrounds and do not learn at the same rate but yet are expected to achieve the same levels year-after-year, graduating precisely twelve years after entering that first grade door. Or they and the school are losers.

It doesn't have to be that way anymore since we no longer place as high a value the same purposes schools once served. Learning can be accomplished at a pace that is consistent with the child's background and development, with the goal of achieving the highest possible results even if it takes more time.

Sounds simple, so why don't we change? Mostly because our own communities place roadblocks to such change since it is so radically different from the schools they attended. However, some of the most serious obstacles are embedded in ridiculous state or federal regulations such as that illustrated in the excerpt below taken from a handbook for understanding (if that's possible) Michigan's color-coded school rating system (forced on us by NCLB but only because we allow the federal government to have that power over us). As you can see, ungraded school systems are fine as long as students take the state-mandated assessments designed for each grade level at the same age as students stuck in a graded school structure.

So in the end schools can be innovative in the 21st century as long as they maintain the key problematic innovation of the assembly-line, industrial-era: age-based progression. 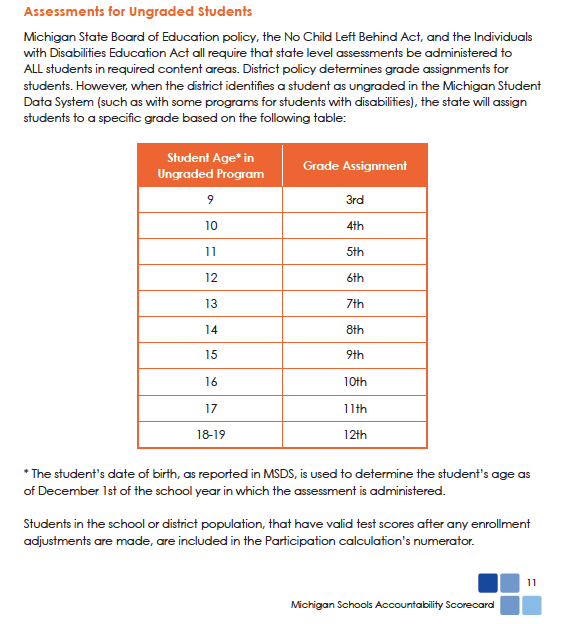 Change begins with removing the root of the problem...

Reincarnation of the Efficiency Movement is Here!

Are We Too in Love with the Past?

The Problem with the Graded Schools

Taking Action During a Storm

12 Things I'd Do Right Now to Improve Education


Posted by David Britten at 09:58 No comments: Links to this post