In the early days, they didn't call it a "mascot," but rather an emblem. And while we know from the 10-minute video produced this past winter that the emblem made its first public appearance in the 1943 Lee High School Echo yearbook (Wyoming, Michigan), it was actually decided on several years prior.

According to accounts in several editions of the Ariel student newspaper, the Varsity Club met on April 18, 1939 to consider about a dozen different designs for the "Rebel Emblem."  During the meeting, they selected two entries by students Norman Alyea and Fred Praasterink. The club then appointed Willard Brandel and Merle Verberg to take the two designs to the Art Craft Novelty Company to be drawn by a professional artist.

A week later, the Varsity Club placed the artist's conceptions of the two designs in the hallway display case at Lee, likely to invite feedback from other students before a final selection was to be made. The club planned a special meeting at the end of the week to vote on the selection. Unfortunately, there were no more reports in the Ariel nor were there any graphic illustrations but it's presumed that the Rebel emblem highlighting the 1943 yearbook is what the club voted to approve, and likely what morphed into a sew-on patch that began showing up on letter sweaters and some athletic uniforms. This version of the Rebel emblem lasted into the 1960s only to be phased out and replaced by the Confederate battle flag.

There is mention in the October 5, 1939 Ariel that the senior class rings would include a "special design of the Lee High Rebel." The Echo yearbook published the previous spring included a photo of a girl's hand sporting a class ring with what appears to be that same design, although it's too small and grainy to be certain.

In all of this process, it appears from the published evidence that only students were involved in the decision-making, however the Varsity Club did have a faculty advisor.


Posted by David Britten at 11:47 No comments: Links to this post

I have been asked by folks to post the Lee High School (Wyoming, Michigan) Ariel newsletter pages from the several different student newsletters published during the 1958-59 and 1960-61 school years that were referred to in the video. As a historian, I feel obligated to do so.

If you haven't already, you are encouraged to view the 10-minute video at https://youtu.be/yKB2vFBpS6o to gain broader context for these articles.

Please note, especially if you are seeing this for the first time, that the majority of the symbols, and in particular the Confederate battle flag, have not for the past two or more decades adorned the halls, classrooms, publications, or clothing of Lee students and their school. 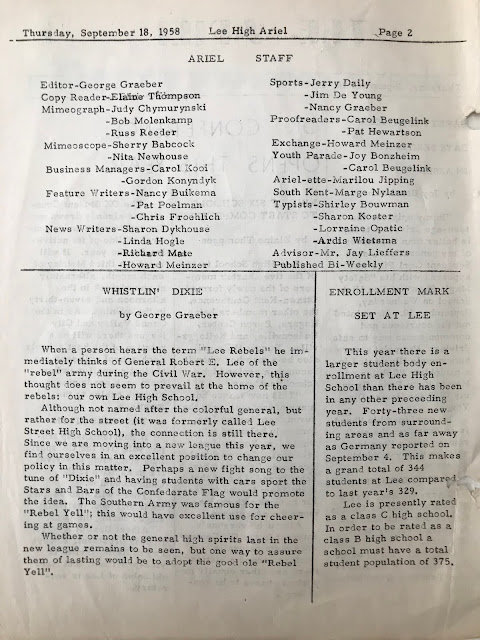 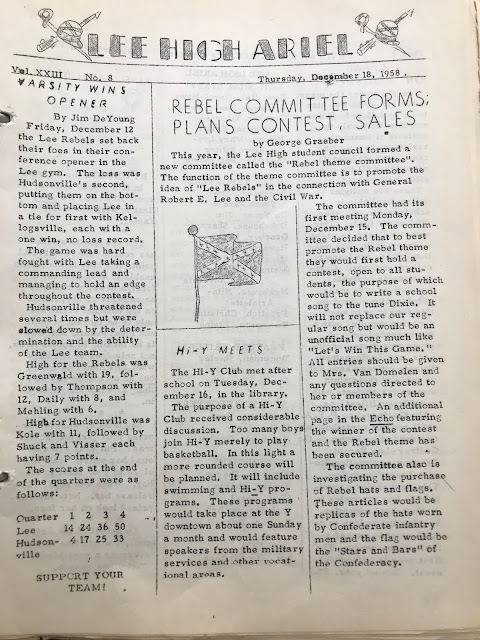 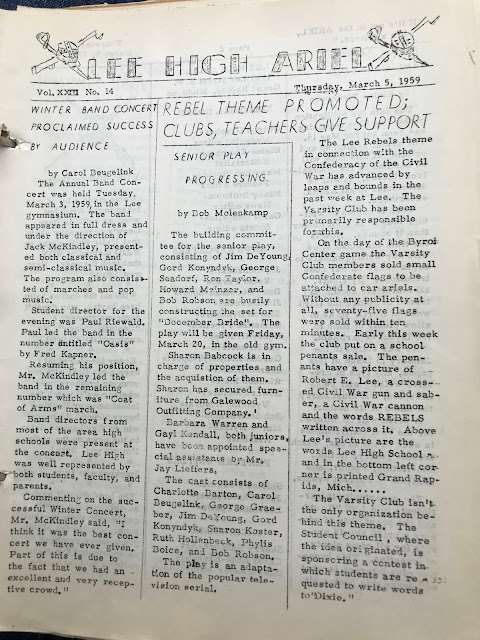 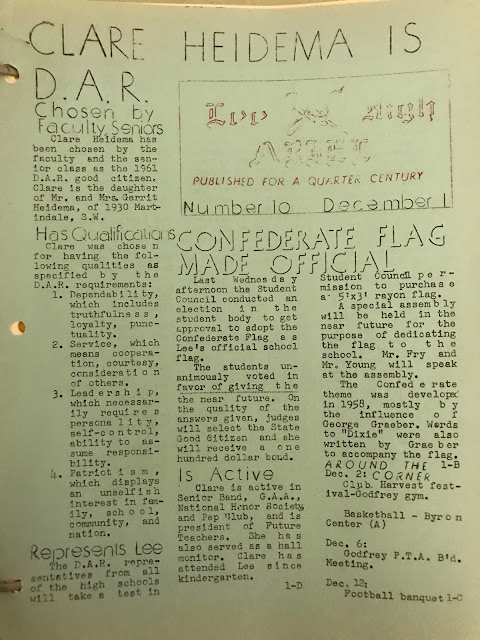 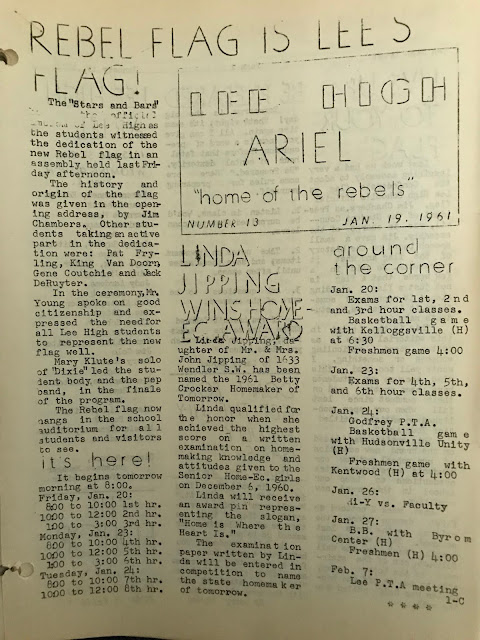 Posted by David Britten at 15:52 No comments: Links to this post

In 1936, with help from the Depression-era Works Progress Administration (WPA), Godfrey-Lee and Wyoming Township set about building a new "playground" complete with a lighted football field, track, tennis courts and baseball field. The project was truly a community undertaking and it employed 615 men on depression-era relief using hand labor, as much of the dirt dug out to create the “bowl” for the football field was moved by the use of shovels and wheelbarrows. The excess dirt was used to fill in the swampy low areas of Happy Hollow along what today would be the visitors’ seating area of the football field.

Lee Field was an important project for the community as it provided needed work for men in the district who were desperate to provide their families with the necessities of life. At the same time, it developed a blighted area into a very useful athletic field at a nominal cost to the local taxpayers. When the field opened in 1938, Lee High School was the envy of the larger schools in the area.

The field was dedicated on Friday, September 23, 1938 and the ceremonies included a “mile-long parade, headed by a police motorcycle escort, followed by the crack Neal Fonger Post American Legion drum corps of Grandville.” Also participating were the Urbandale-Galewood fire department, the Business Men’s association, Lee band, school traffic squads from Lee, Godfrey and Holy Name School, the football teams, Burlingame Congregational Boy Scouts, Godfrey-Lee and Holy Name PTAs, Catholic Order of Foresters, Boy Rangers, Progressive (dramatic) Players of Holy Name, and a number of other organizations.  In fact, the entire community was excited about the new field and expected to take part in some way. It was noted by the press that 2,000 people lined the streets to witness the parade and 5,000 gathered for the dedication event, “by far the largest event ever to held in any suburban area in the Grand Rapids district.”

Oddly, there was no football game scheduled as part of the dedication. Instead there were speeches; many, many speeches. Eleven to be exact and it forced the program to drone on.

Following the dedication of the new Lee Field in September 1938, a storm erupted over criticism in the student newspaper of the "endless speeches" that took place that evening.  The eleven speeches caused the program to run nearly four hours which led to the cancelling of an intra-squad football contest and other student events.

The students in particular were not happy.

Ward Tibbet was the teacher-advisor for the three-year-old student publication title the "Ariel."  At the time, it was a popular, daily mimeographed sheet that had begun as an aid for Tibbet's English classes.  Students and staff paid for a copy of the Ariel and the proceeds went towards production of the annual yearbook.  From newspaper articles of the period, Tibbet was a very popular young teacher.

On Tuesday morning following the dedication, the Ariel contained a front-page article that proclaimed, "11 speeches were about 10 too many," and proceeded to ask a number of questions provided by the students to Tibbet.  One particular question was, "Why did every member of the board of education have to talk?"  Still another asked, "Why weren't the Lee groups allowed to do their stuff after waiting from 7 to 11 o'clock?"

On Wednesday evening, the board of education met with Superintendent Roy Head on another matter, but the Ariel's editorial came up in discussion.  The board directed Superintendent Head to suspend Tibbet until the evening of October 10, at which time they planned to hold a hearing on the matter.  Tibbet was informed the next morning prior to the start of the school day and a substitute teacher filled in for him.

Just prior to the 1:00 pm bell for students to return to classes following lunch, a student strike broke out with about three hundred students staying outside of the building and posting picketers at the doors.  Students took up placards and marched or rode in cars around the district, loudly voicing their dismay that a popular teacher might lose his job.

Despite Tibbet's encouragement from his home that students return to classes, the demonstration went on for most of the afternoon.  Student leaders issued a statement, which read in part:

"We, the students of Lee high school think that Ward Tibbet has certainly received a raw deal in being suspended and perhaps dismissed from our teachers' staff because of writing the general opinion concerning the dedication of the new field.  We are all of the same opinion as Mr. Tibbet and the biggest majority of our parents feel the same as we do, that the field is for sports and the benefit of the school, and not for the good of the board and the speakers….  Mr. Tibbet was one of our best teachers and has done more for the students' interest at Lee high than any teacher there, spent his own money and time for their interests and we feel that if he is not reinstated and given a fair deal it will cause a lot of trouble at our school."


Beset with pleas for immediate resolution of this case, the board met before school on Friday morning and decided to reinstate Tibbet to his teaching duties.  Because board meetings were closed in those days, the only indication of what occurred was a statement from Superintendent Head that "the difficulties between Mr. Tibbet and the school board have been ironed out…"

Nothing more was heard of the matter, however the incident did prove that students can have a strong voice when they are united in a just cause.

Posted by David Britten at 18:27 No comments: Links to this post