The Grand Valley Armory: 50 Years of Service to Community, State and Nation

Fifty years ago this month, the Grand Rapids area Army National Guard units moved from their temporary headquarters in the old Berkey & Gay furniture factory to the new Grand Valley Armory on 44th Street in Wyoming.

Built on 10 acres of land that once was slated to be part of the World War I-era Picric Acid Plant that was never completed, the 63,000 square foot armory became the new home for the following units:

The 126th Infantry traces its lineage back to July 12, 1855 and the Grand Rapids Light Guard. Throughout its history, the 126th and its predecessor units from Grand Rapids and other parts of West Michigan saw action in the Civil War (3rd Michigan Regiment of Volunteer Infantry), War with Spain (32nd Regiment), Mexican Border War (32nd Regiment), and both World Wars (126th Infantry, 32nd "Red Arrow" Division).

The Grand Valley Armory replaced the old Michigan Street Armory (pictured below) occupied in 1916 by the 126th Infantry after it's return from duty along the Mexican Border near El Paso, Texas. That armory was the first in the area built with state funding and was a very popular community center until the Civic Auditorium was built in the 1930s. 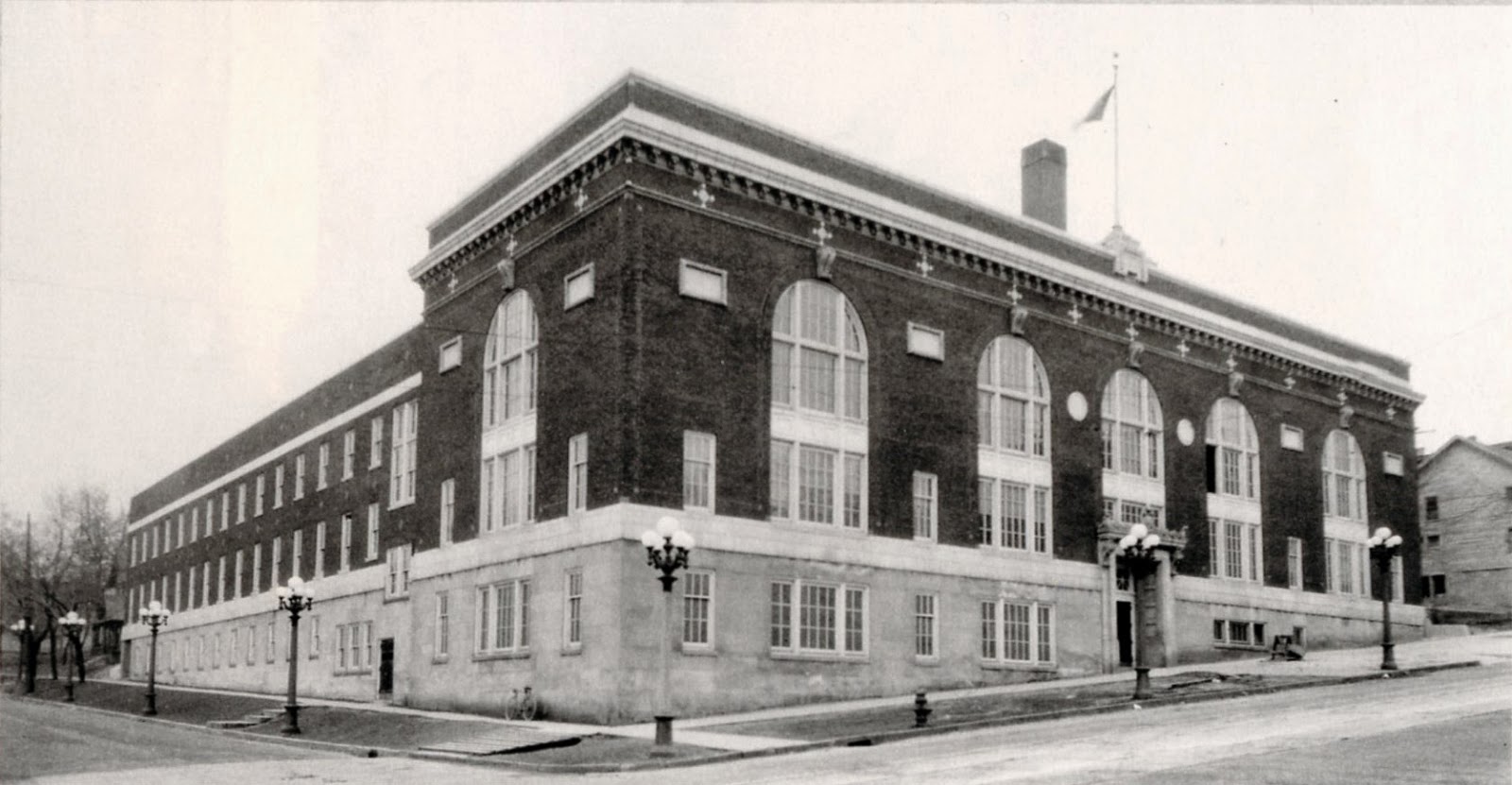 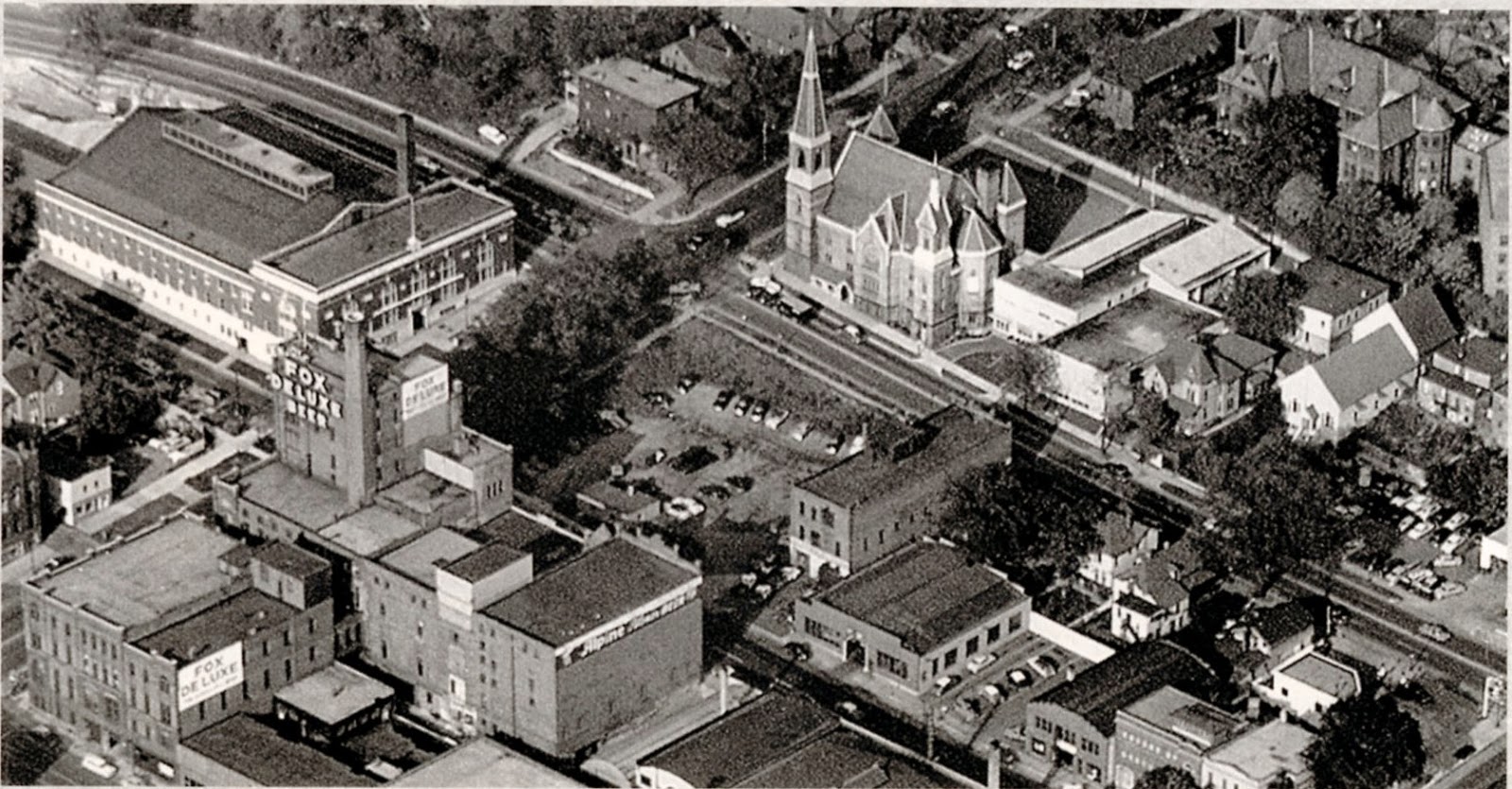 The Michigan Street Armory, which had become overcrowded due larger units and more modern military equipment, sat in the path of the new I-196 expressway and was scheduled to be torn down. The armory was vacated in 1959 but because a new armory had not yet been built, temporary space in the old Berkey & Gay factory on North Monroe became home to the 2nd Brigade and 126th units for several years. 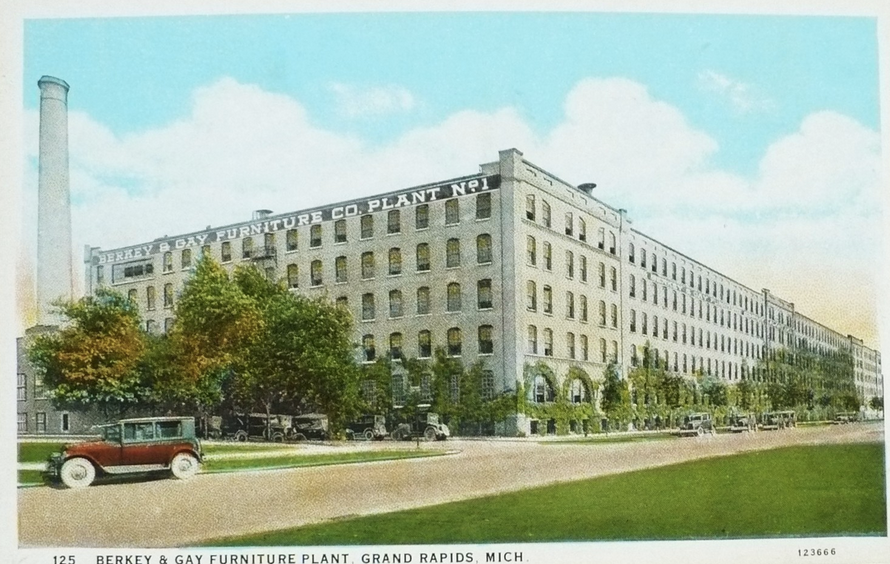 The new Grand Valley Armory would not be formally dedicated until late May of 1965, however, by then the units would be completely settled in. The dedication program, attended by over 5,000 citizens of the Grand Rapids, Wyoming and other West Michigan communities was captured even by The Detroit Free Press that ran this photo and short article: 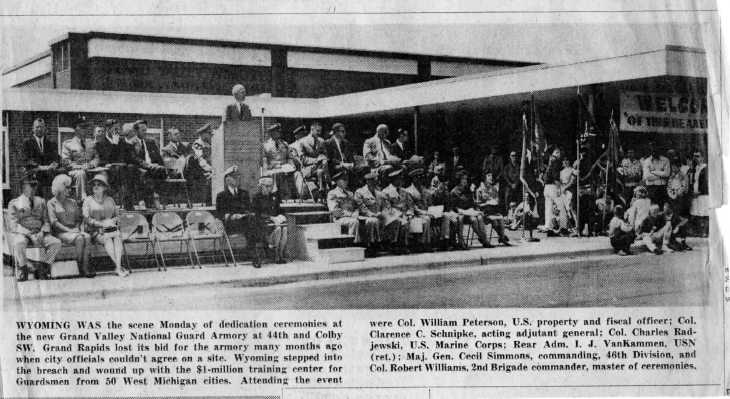 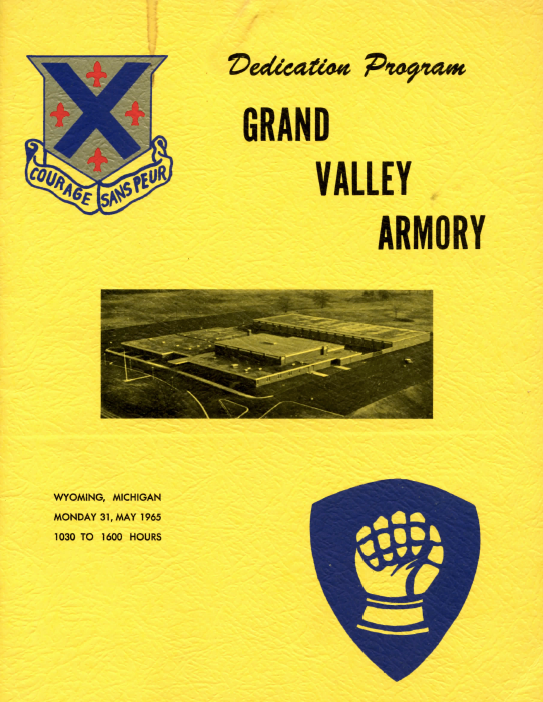 A number of years later, the Armory would become the site of the City of Wyoming's only official memorial to area veterans until the Veterans Memorial Garden was constructed near Pinery Park. 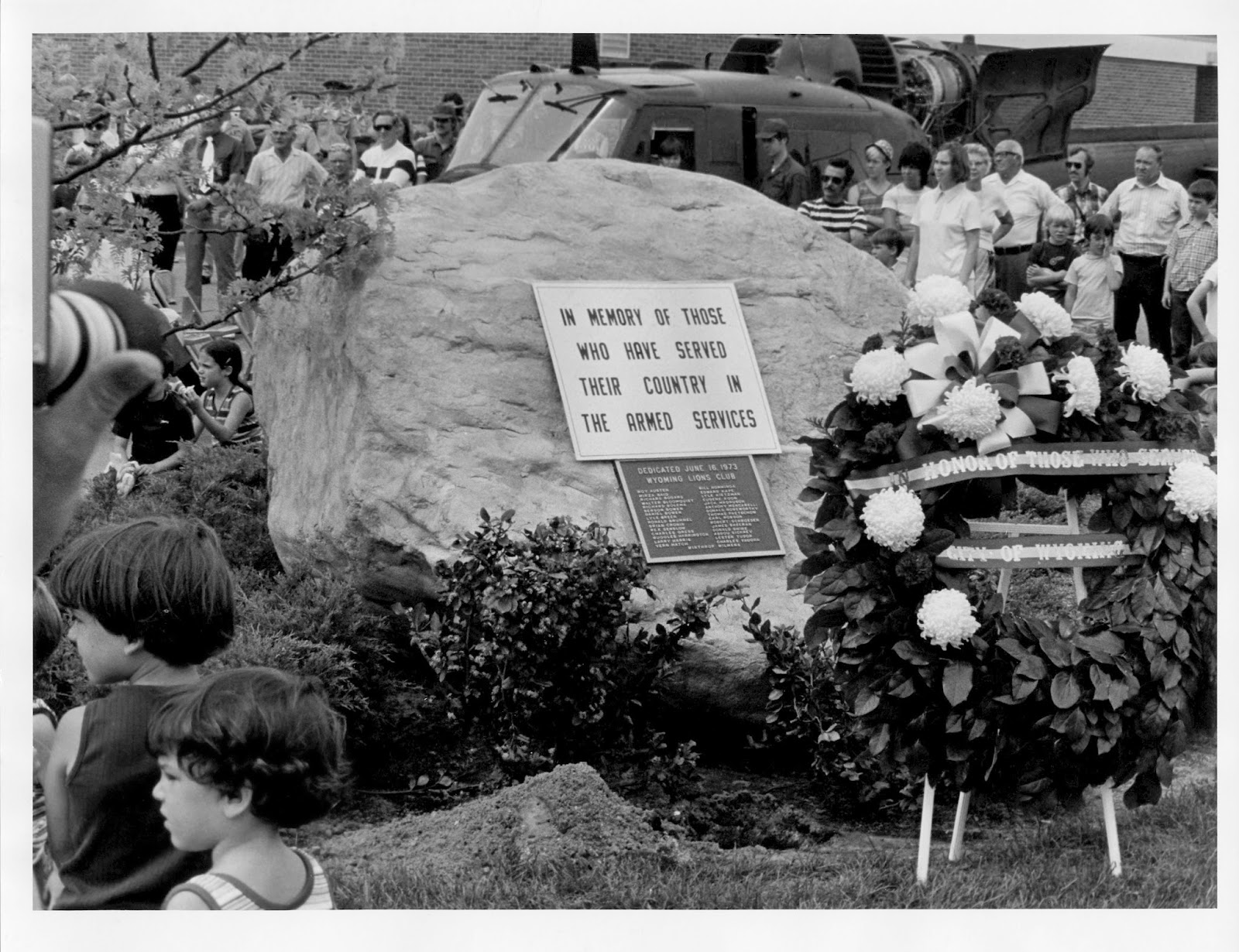 The military units at the Grand Valley Armory have been reorganized and re-designated a number of times over the past fifty years. Today's 126th Calvary Squadron is the senior organization.

The section of 44th Street that runs through the City of Wyoming was given the honorary designation as 126th Infantry Memorial Boulevard and a State of Michigan Historical Marker was dedicated on the site.

From Courage without Fear: The Story of the Grand Rapids Guard. Lieutenant Colonel (Retired) David G. Britten. Xlibris. November 2004.
Posted by David Britten at 14:33 No comments: Links to this post

The Clark Building: A Small Piece of Grand Rapids Lore

This afternoon, my wife and I ventured into Downtown Grand Rapids for lunch at HopCat, one of a number of local taverns that have sprung up in the past several years. As we sat at a window table along Ionia Avenue, I couldn't help but notice the old Clark Building sitting diagonally across the intersection from us. I'm fairly certain that most of the folks who were sitting in this establishment with us (and it was nearly to capacity) know anything about the unique history of this 107-year-old, red-brick building. So on this 378th birthday of the National Guard, our nation's oldest military service, I thought I'd take just a moment and share a bit of Grand Rapids history with you. 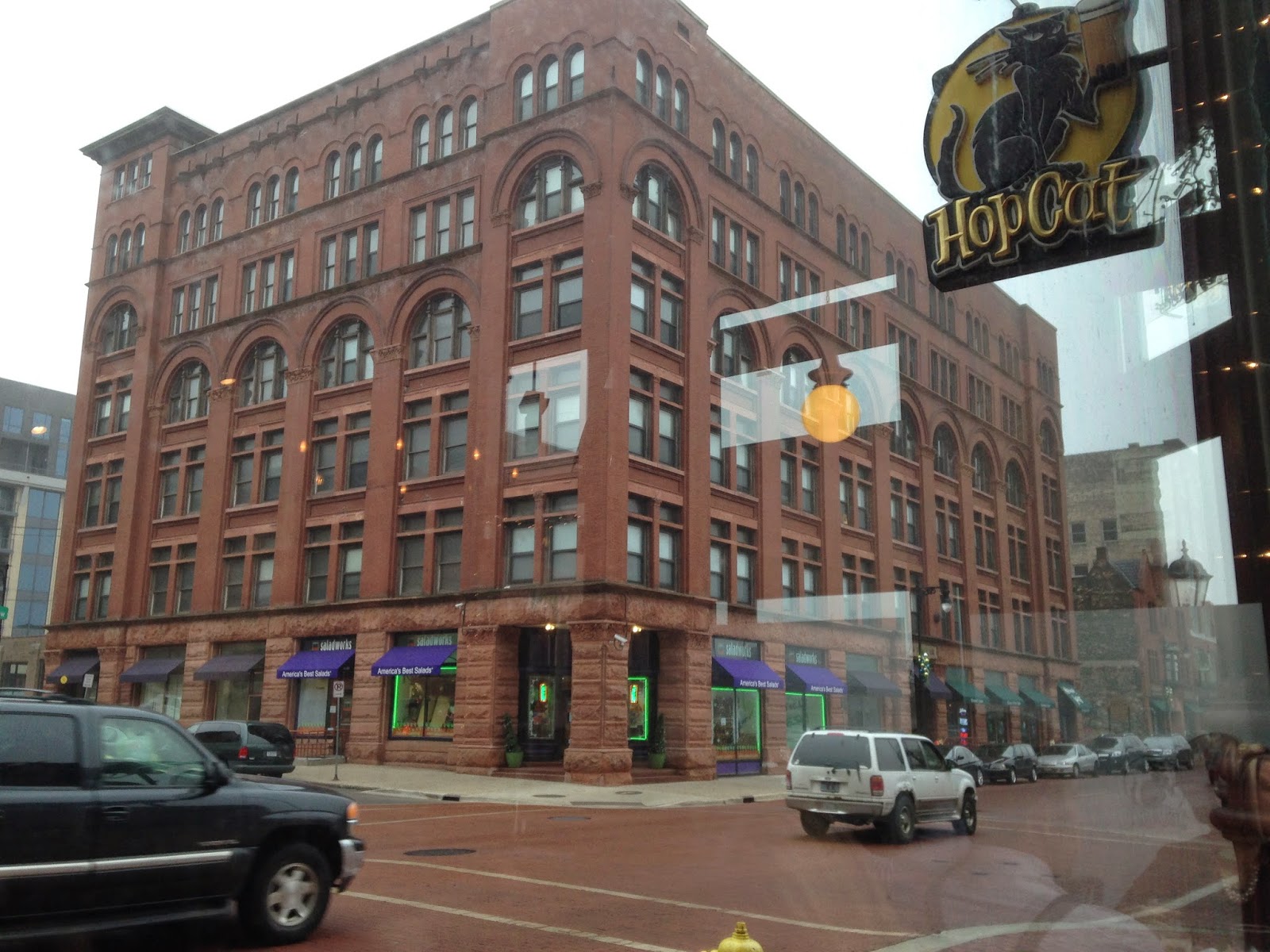 In December of 1896, companies B, E and H of the Second Infantry had voted to consolidate into the Grand Rapids Battalion.  The following May, the battalion moved into its new armory in the Clark Building at the corner of Ionia and Island (now Weston) streets, celebrating with its first annual ball held in honor of Governor Hazen S. Pingree.  Included in the guests of honor were former Second Regiment officers such as Brigadier General Edwin M. Irish, the first Adjutant General of Michigan from the Second Regiment and its successor organizations; Brigadier General William L. White, quartermaster general; and Brigadier General Fred H. Case, inspector general.  Heading the reception committee was Brigadier General Israel C. Smith.


Today will be a red letter day in local military circles.  The new armory of the Grand Rapids battalion will be opened this evening amid a blaze of military glory, in the presence of Governor Pingree and staff.

Military men were as busy as bees at the armory all day yesterday.  The quarters are assuming a beautiful aspect to greet the eyes of the governor.  The preparation of the reception parlors and the companies’ quarters has been completed. (Grand Rapids Herald, May 28, 1897) 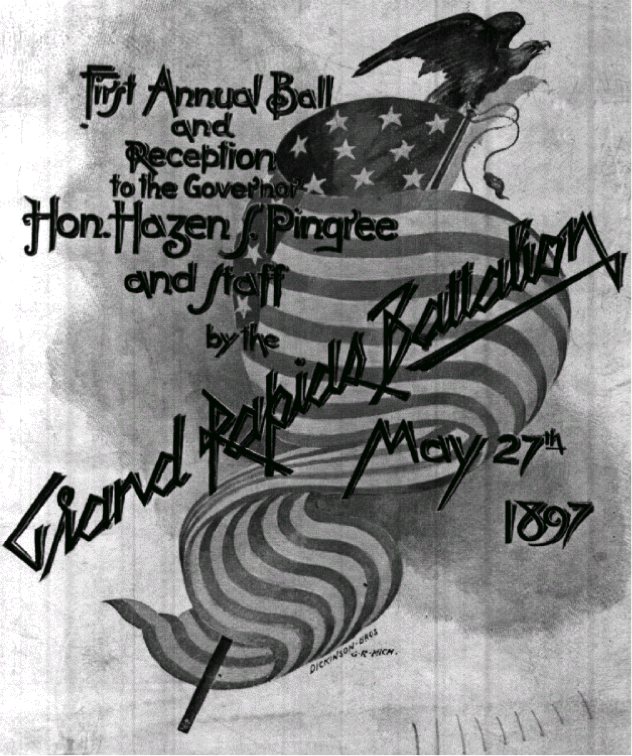 The governor arrived at Union Station shortly after one o’clock that afternoon, where he was met by all of the officers of the regiment.  With the battalion band in the lead, the party marched up South Ionia Street from the depot, turning east on Fulton Street and then north onto Division, eventually arriving at the Morton hotel.  Following visits to several of Grand Rapids’ furniture factories, the governor put in his appearance at the new armory later that evening, escorted by General Smith.
While the governor was busy visiting furniture factories, the Second Regiment had been conducting its regular annual elections at the armory:

Contrary to all expectations Capt. Vos of Company E was not elected major, although the majority vote was held by the Grand Rapids battalion.  All the boys are pretty sore, as in many directions comes the report that the officers of Company B did not support a home candidate, but nominated and elected Capt. Mitchell of Ionia, Company G, to be a major. (Ibid.)

This did not sit all too well with the members of Company E.  They felt Company B owed enough gratitude to support Captain Vos for major.  It appears that Company B had been heavily in debt prior to the consolidation a year earlier and gained the most when all three accounts were thrown together.

The Clark Building armory was thought to be one of the finest armories in the state.  Its furnishings and equipment had a value estimated at $11,000.  The drill hall was rather large, and the armory included ample equipment rooms, assembly rooms, billiard rooms, reading rooms, officers’ rooms, an indoor target range eighty feet in length, a cafe, club rooms, elegantly furnished parlors, and a library.


The battalion is at present, the largest and strongest organization of its kind in the state and stands a credit to its promoters and the city whose name it bears.  The financial standing of the battalion is firm, and its debt is in a fair way to be entirely extinguished, leaving the corporation the owner of a large amount of valuable property.

The fourth floor of the building was entirely occupied by the battalion. Divided into two sections by a hall running the entire length, one side provided rooms for social functions including two parlors, toilet rooms, a library, café, kitchen and pantry.  The other section provided space for the military functions including four company rooms, four officers’ rooms, equipment rooms, and an assembly room. The main drill hall was located on the fifth floor, large enough to accommodate the entire battalion although each company continued the practice of holding drill nights on separate evenings.

A fourth company joined the original three providing Grand Rapids with a complete battalion for the first time since the Guard’s founding in 1855.

The Grand Rapids Battalion remained quartered in the Clark Building until 1914 when it moved to a temporary armory on LaGrave Avenue until the new state-funded armory on Michigan Avenue could be completed. During those sixteen years on Ionia Avenue, the Grand Rapids Guard would experience mobilization and deployment to Tampa, Florida during the War with Spain in 1898, respond to the 1909 nationwide railroad strike, and serve in the Upper Peninsula during the 1913 copper strike.

Posted by David Britten at 16:01 No comments: Links to this post

"...there exists no reasonable justification for districts like those identified in my recent report onAmerica’s Most Financially Disadvantaged schools to be saddled with double the poverty and substantially fewer resources to apply toward achieving common outcome goals with their far more advantaged peers."

Posted by David Britten at 13:01 No comments: Links to this post

Where Has the Time Gone?

Tuesday this week is one of those anniversaries that periodically pop up in our respective lifetimes.

On December 9, 1974, having been out of high school for a year and a half going nowhere, I walked into a recruiting office and as a result my life has never been the same. Over the course of the next forty years:


So while I feel like I've been running a continuous sprint these last four decades, I'm thankful for the many opportunities I've been able to take advantage of and those yet to come. Mostly, I'm thankful for the support I've received not only from my adorable wife (and my best friend) and our incredible son (and his wife), but from everyone I've ever had the pleasure to serve and to serve with over all these years.

And you know what? I'm just as excited for the next forty!
Posted by David Britten at 22:01 No comments: Links to this post