Michigan came out with its 2013 rendition of "which schools are struggling with poverty-related issues and which aren't." Disguised as a ranking system designed primarily to fool the public into thinking some schools are intentionally crappy while others are the creme dela creme, it really is nothing more than another blinding flash of the obvious.  Did we really need another expensive system for identifying which schools and districts have higher rates of poverty than others? Perhaps someone should tell the Department of Education that data already exists. 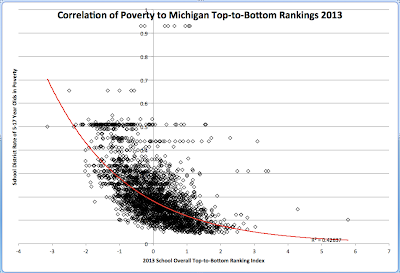 The chart correlates the percent of children ages 5-17 in each school district with the overall index used to rank Michigan's public schools.  The indices from 2,567 mostly traditional, community-based public schools were used along with the poverty data from their respective school district. Only charter schools were used if they constituted an entire district or it was obvious which district they were located within.

The Pearson R-factor for this chart is -0.584 indicating a strong correlational relationship between the two sets of data. The red line illustrates the correlational trend.

In the next chart, schools are grouped by deciles based on their respective Michigan Top-to-Bottom ranking for 2013 (from 0 to 99th percentile). The chart illustrates the average poverty percentage for children ages 5-17 in the districts comprising each decile. It is abundantly clear that lower poverty districts rank higher on the TTB and vice-versa for higher poverty districts. 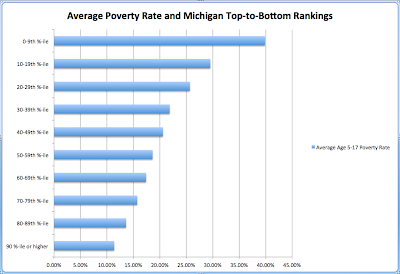 Poverty percentages for each school district come from the United States Census Bureau, Small Area Estimates Branch, 2011 SAPE with a release date of December 2012. The school top-to-bottom indices are from the Michigan Department of Education website for School Accountability.

Below are four charts from a previous post of mine back in March 2013 (originally on the Posterous blog site which has since gone defunct). I add them here just to continue the demonstration of how poverty strongly correlates with achievement. They represent 515 Michigan traditional community school districts from the Fall 2013 MEAP assessments. Once again, you can click on any chart to enlarge it for better viewing. 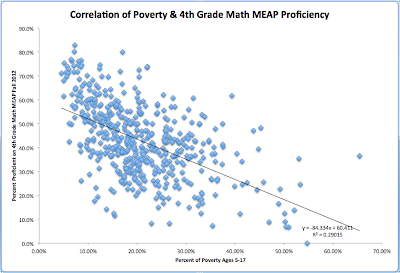 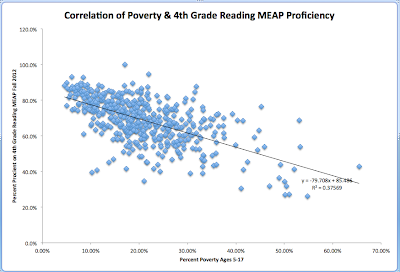 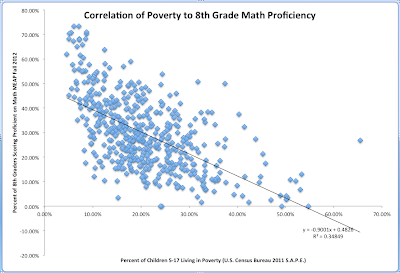 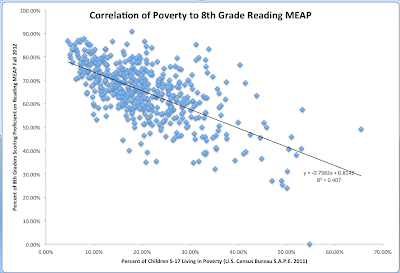 The data here and in other, more rigorous research is irrefutable and damning. So, the question is when are we going to quit wasting time collecting data that only tells us the obvious and spend more time and other resources on ending poverty and overcoming the effects of inequity in school funding?
Posted by David Britten at 13:16 No comments: Links to this post

Just the Facts from OECD 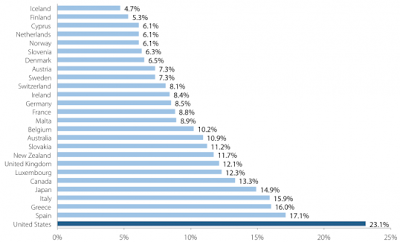 Source: http://www.oecd.org/education/CN%20-%20United%20States.pdf
Posted by David Britten at 16:34 No comments: Links to this post

Who's REALLY Representing YOU?

Who's really representing YOU in Lansing? Here's a partial list of current and former Michigan legislators that are members of ALEC (American Legislative Exchange Council). What is ALEC? Glad you asked. 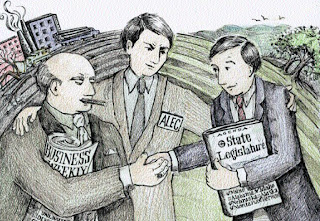 ALEC is a corporate bill mill. It is not just a lobby or a front group; it is much more powerful than that. Through ALEC, corporations hand state legislators their wishlists to benefit their bottom line. Corporations fund almost all of ALEC's operations. They pay for a seat on ALEC task forces where corporate lobbyists and special interest reps vote with elected officials to approve “model” bills. Learn more at the Center for Media and Democracy's ALECexposed.org, and check out breaking news on our PRWatch.org site.

Now go check out the list at http://www.sourcewatch.org/index.php/Michigan_ALEC_Politicians.  You may or may not be surprised but at the least, you'll be informed.
Posted by David Britten at 06:18 No comments: Links to this post