Statue for Abe Lincoln? Maybe not so fast 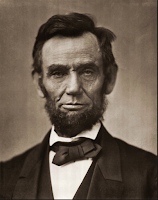 There's little doubt that anyone who has studied our 16th president in depth will find he was a complicated man as well as a man of his times. We're usually quick to criticize the past based on present morals and opinions, but after reading the research I'm not so sure Kalamazoo officials should rush towards a decision on erecting a statue of Abraham Lincoln.

Lincoln, like many abolitionists leading up to the Civil War, abhorred slavery, but as far as empathy for African-Americans, that's about where it ended. The war began as a means of preserving the Union while blocking slavery in newly admitted states and territories. Lincoln had no initial plans to free the slaves and in fact would have accepted slavery in the existing southern states if that's what it took to keep the Union together. In other words, he was willing to punt the problem down the road if necessary.

Obviously, as president his views changed and emancipation moved slowly to the forefront. But his stance on equality in all aspects of life did not change. He firmly did not believe whites and blacks were equal, or that they could ever be equal. He believed as did the majority of whites that their race was superior over the African race.

Ronald White Jr., in his substantial biography titled A. Lincoln (Random House 2009), told of Lincoln's views on colonization rather than the two races learning to live and work together. This was a similar view to that of Thomas Jefferson, a slave owner who expressed his concern that slavery would eventually destroy our nation and the best solution was to relocate anyone with African blood to an island in the Caribbean or to Central America. Rather than simply try to explain what White wrote about Lincoln and what the president said, here's an excerpt from the book (with my highlights):

In a more recent publication, Pulitzer Prize-winning author Jon Meacham's The Soul of America: The Battle for our Better Angels (Random House 2018), reinforced White's point that Lincoln did not necessarily favor equality or at least had not evolved to that point.

African-American historians have also concluded the same regarding Lincoln although noting as I have that the president's views were evolving over time and one has to wonder how different Reconstruction might have been had he lived. But that would only be conjecture and all we have to go on is the recorded history of his public speeches or written notes: Esteemed Harvard Professor Henry Louis Gates, Jr., in his just-published book Stony the Road: Reconstruction, White Supremacy, and the Rise of Jim Crow (Penguin Press 2019), explains further how being an abolitionist of slavery did not infer "being a proponent of the fundamental equality of black and white people, or the unity of the human species..."

Carol Anderson, Chair of African American Studies at Emory University, is more concise as she points out Lincoln's early flawed thinking in White Rage: The Unspoken Truth of Our Racial Divide (Bloomsbury 2016).

Certainly credit is due where it was earned and Abraham Lincoln was the principle leader behind the ending of slavery. Frederick Douglass, a black abolitionist who had escaped the bonds of slavery, pointed this out in 1875 during a speech while unveiling a monument to emancipation: “in his heart of hearts he loathed and hated slavery.” This was certainly a change in attitude by Douglass as early in the war he was quoted as saying, “Abraham Lincoln is no more fit for the place he holds than was James Buchanan, and the latter was no more the miserable tool of traitors than the former is allowing himself to be.” Distinguished historian James A. McPherson noted in a review written for The New York Review of Books (3/29/2007):

But in Douglass’s view, Lincoln backslid after issuing the proclamation. Just as the President had seemed too slow in 1862 to embrace emancipation, he seemed similarly tardy in 1864 to embrace equal rights for freed slaves. For a time Douglass even supported efforts to replace Lincoln with a more radical Republican candidate for president in the election of 1864.

My point with this post is not to disparage Abraham Lincoln or throw him into the gutter with those disgusting Americans throughout history and even today who see the white race as supreme over blacks and other races. Rather, during this difficult time of continuing to reconcile our past differences and attempting to unite all Americans regardless of race, this just might not be the right time or it may never be the right time to raise a statue of our 16th president in Kalamazoo. Rather, the city leaders might want to engage a more inclusive discussion of the merits of honoring Abraham Lincoln and the appropriate way of doing so.
Posted by David Britten at 07:21 No comments: Links to this post

I have always been a voracious reader even though I tend to read slowly for physical reasons. I also have a habit of reading several books simultaneously which helps to keep me from losing interest in any one of them. Rarely do I set a book aside and fail to complete it but sometimes I may set it aside for a year or more before I pick it back up.

Since I retired as a school superintendent on June 30, 2017, I have had an appetite for historical works and in particular biographies. I learned from an author that reading biographies is a better way to learn about our history since it becomes more personalized. Great biographical authors will detail events as they were interacted in, with, or by the principle subject. So far, I have found that to be true.

There are other topics that I take an interest in that are included in the list below. Some are related to my passion as a local historian, others to my continuing interest in our public education system. For better or worse, here is my list which includes at the end the three books I'm currently reading. And just a note, regardless of how it looks reading is certainly not the only activity I'm engaged in but it is certainly one I enjoy.

Termin, Peter. The Vanishing Middle Class: Prejidice and Power in a Dual Economy

Kelly, Kevin. The Inevitable: Understanding the 12 Technological Forces that Will Shape Our Future

Callahan, David. The Givers: Wealth, Power, and Philanthropy in a New Guilded Age

Wadhwa, Vivek. The Driver in the Driverless Car: How Our Technology Choices Will Create the Future

Lewis, Michael. The Undoing Project: A Friendship that changed Our Minds

Vance, J.D. Hillbilly Elegy: A Memoir of a Family and Culture in Crisis

Stampp, Kenneth M. America in 1857: A Nation on the Brink

Meijer, Hendrik. Arthur Vandenberg: The Man in the Middle of the American Century

Hitchcock, William I. The Age of Eisenhower: America and the World in the 1950s

Greenberger, Scott S. The Unexpected President: The Life and Times of Chester A. Arthur

Gave, Keith. The Russian Five: A Story of Espionage, Defection, Bribery and Courage

Caplan, Bryan. The Case Against Education: Why the Education system is a Waste of Time and Money

Dintersmith, Ted. What School Could Be: Insights and Inspiration from Teachers across America

Robinson, Ken. You, Your Child, and School: Navigate Your Way to the Best Education

Borneman, Walter R. Polk: The Man who Transformed the Presidency and America

Meacham, Jon. The Soul of America: The Battle for Our Better Angels

Fallows, James M. Our Towns: A 100,000-Mile Journey Into the Heart of America

Churchwell, Sarah. Behold, America: A History of America First and the American Dream

Mayer, Milton Sanford. They Thought They Were Free: The Germans, 1933-45

Jeffers, H. Paul. An Honest President: The Life and Presidencies of Grover Cleveland

Strauss, William. The Fourth Turning: What the Cycles of History Tell Us about America’s Next Rendezvous with Destiny

White, Richard. Railroaded: The Transcontinentals and the Making of Modern America

Beschloss, Michael R. Presidents of War: The Epic Story, from 1807 to Modern Times

Stoddard, Francis R. The Truth about the Pilgrims

O’Reilly, Bill. Killing the SS: The Hunt of the Worst War Criminals in History

Philbrick, Nathaniel. Mayflower: A Story of Courage, Community, and War

Dourcet, Armand. Teaching in the Fourth Industrial Revolution: Standing at the Precipice

Luxenberg, Steve. Separate: The Story of Plessy v. Ferguson, and America’s Journey from Slavery to Segregation

Philbrick, Nathaniel. The Last Stand: Custer, Sitting Bull, and the Battle of the Little Bighorn

Philbrick, Nathaniel. Bunker Hill: A City, a Siege, a Revolution

Posted by David Britten at 20:10 No comments: Links to this post

Email ThisBlogThis!Share to TwitterShare to FacebookShare to Pinterest
My response below to this article in the Daily Mail:

One-in-five white people say the civil rights movement 'has gone too far' – while half of African Americans believe they will never have full equal rights in America, survey reveals 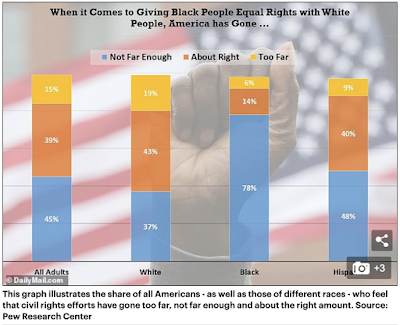 As I see it from my study of history, the problem is rooted in the sad fact the average person has little to no historical understanding of how the state of race relations got to this point in the first place.

They have little knowledge or empathy for the damage inflicted by the rise of “Jim Crow” laws, the sudden end of Reconstruction, Redemption and “The Lost Cause,” “Separate but Equal” segregation which was anything but equal, the Supreme Court’s invalidation of numerous Civil Rights laws dating back to the end of the Civil War, openly racist presidents such as Woodrow Wilson among many others, tolerance for the rise of the KKK, turning a blind eye to thousands of lynchings and other terrorist acts, “Red Lining” housing restrictions for non-Whites, the “Green Book,” widespread use of Confederate symbols to intimidate, and more than a century of framing Blacks as “inferior to Whites and a danger to American culture.”

All of this has worked to ingrain racist attitudes and actions deep within our national psyche, whether we admit to it or not. And not just a Black-White problem but including Native Americans, Hispanics, Asians, and others. What we sorely need is a change to our education system that emphasizes the reality of history versus the White-washed standards we have now, as well as a serious moment of reflection on our own personal and collective values.
Posted by David Britten at 08:05 1 comment: Links to this post