A common slogan around Memorial Day or during a heartbreaking funeral for a recent war casualty is, "We'll Never Forget!" Well, I'm fairly certain that most of the citizens of the Greater Grand Rapids community do not remember Alfred Medendorp.

Born in 1907 in Milwaukee, Wisconsin, young Alfred had moved to Grand Rapids with his parents several years later where his brother and two sisters were born. Like many in the area at the time, his father had been born in the Netherlands marrying his mother upon arrival in the United States.

Alfred attended South High School and then at just nineteen years of age, married Dorothy Schutt from Dayton, Ohio during the summer of 1927. He set up a chiropractor business while they lived on Division Avenue near Burton Heights and shortly after, they moved to Griggs Street.  Alfred and Dorothy parented three children. He was a graduate of the National College of Chiropractic in Chicago.

Sometime toward the end of the 1930s, Alfred joined the local 126th Infantry National Guard unit at the old Michigan Street Armory near Ionia and Division. When the Guard nationwide was activated in the fall of 1940 for a year of training, then Lieutenant Medendorp left with the 126th for Camp Beauregard, Louisiana where they trained for "modern" warfare on potentially a European battlefield. But December 7, 1941 changed all of that.

Federalized after just completing a year away from home, the 126th, which included National Guard companies from Grand Rapids, Holland, Muskegon, Grand Haven, Big Rapids, Ionia, Adrian and Kalamazoo, was first entrained and sent to Fort Devins, Massachusetts for deployment to Northern Ireland as part of the planned invasion of Europe in the war against Nazi Germany. But General MacArthur was screaming for more troops in the Southwest Pacific to stave off the Japanese Imperial Army's juggernaut and eventually regain the Philippines. He specifically asked for the 32nd "Red Arrow" Division, a combined Michigan-Wisconsin National Guard unit that earned fame during World War I and included the 126th Infantry from West Michigan. His public rants and tendency to pressure President Roosevelt worked and the 126th along with the rest of the division turned around and headed cross-country to San Francisco. Now a captain, Medendorp was in charge of a section of the vehicle convoy that made the 2,200-mile trek sans any decent transcontinental road network. The balance of the 126th travelled by train.

Medendorp and the regiment were shipped that summer to Australia where they continued to train and for what they thought would be the defense of that continent. But MacArthur had different plans and instead threw the unprepared Red Arrows -- with the 126th in the lead -- into jungle warfare in an grueling effort to defeat the Japanese on New Guinea. Medendorp was put in command of two companies that would attempt to traverse the Owen-Stanley Mountain range that split the island in two. The purpose was to beat back the Japanese forces and eventually drive them into the sea.

In his unpublished memoirs, written aboard a troop ship returning home following three years in the South Pacific, Medendorp reminisced that, "Words cannot describe the hardships of that march over the mountains. Besides the steep climbs and descents, there was the daily rain, rivers to ford, wet cold nights, and lack of proper and sufficient rations (the 126th's commander had been killed in a plane crash trying to resupply Medendorp's men and the rest of the 2nd battalion during this trek). The men straggled and lay exhausted all along the trail, but most of them managed to get through, although it sometimes took them until late at night.... With the rest of the men, I went through the pass over the dreaded GHOST MOUNTAIN. One man died on that part of the march."

The Red Arrow Division went on to route the stubborn Japanese at Buna at the cost of hundreds of dead or missing soldiers and thousands of wounded. After rebuilding with new replacements during a rest-and-recovery period in Australia, the 126th continued the fight through Leyte, Luzon and eventually the Philippines. The regiment's last duty of World War II was the occupation of Japan. Along with the rest of the 32nd Division, it had seen a record 654 days of combat.

Medendorp returned home and resumed life with his family and continued as an officer in the local National Guard. In 1954, he volunteered to serve as an advisor to the Nationalist Chinese on the tiny but strategically important island of Quemoy who were staving off an invasion by the mainland Communist Chinese.  On September 3, artillery shelling of the island had been underway for nearly five hours when now Lieutenant Colonel Medendorp and Lieutenant Colonel Frank Lynn of Illinois were both hit by the shelling and killed during what was supposed to be a routine visit to the island for training and inspections.

Back in Grand Rapids, his father said he had written the previous June that "Chinese Reds" were then firing on the island. Colonel Medendorp told him the Reds had offered a $10,000 reward for the capture of any American officer and that the situation was such that he and other U.S. Army men did not dare step outside their quarters unarmed.

Lieutenant Colonel Alfred Medendorp was laid to rest in Rest Lawn Memorial Cemetery on Eastern Avenue near 32nd Street.  On May 30, 1966, President Lyndon Johnson mentioned Medendorp along with eight others in a special honor roll during traditional Memorial Day ceremonies, although he got the year he was killed wrong. The President remarked that, "These men represent all those Americans who have risked their lives -- and lost them -- in the peace-building efforts that America has made since 1945. They were sent on their missions because this Nation believes that peace is not something that just happens. Peace does not come just because we wish for it. Peace must be fought for. It must be built stone by stone." 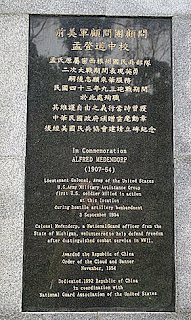 Nearly forty years after his death, a memorial was erected on the spot where Medendorp had been killed by the shelling.

US military Lt. Col. Alfred Medendorp, a former member of the U. S. Army Military Assistance Group was killed in combat at the Kinmen Shuitou Wharf during the Artillery Bombardment of September 3rd (September 1954). He died in action under the fire of the Communist China’s artillery. He was 47 years old (1907-1954).

In the fall of 1954, on the eve of the Southeast Asia Convention, Communist China attempt to exert pressure over the nations attending the convention to influence the agenda of the convention. Driven by a desire to pound the Kinmen area in a surprise offensive, China bombarded a navy vessel docked at Shuitou Wharf to strengthen its international clout, thus bringing to reality its political blackmail scheme. Since Communist China dared not launch a direct offensive, it resorted to the violent bombardment of Kinmen.

September 3, 3:00 p.m. Communist Chinese artillery began pounding the islands of Kinmen (Greater Quemoy and Lesser Quemoy), and sending surprise attacks on Shuitou Wharf. Kinmen Defense Commander Gen. Liu Yu-Chang immediately ordered the artillery troops to launch counter strikes to suppress the Chinese attacks. Communist China pounded Kinmen for two straight hours that day, and continued to launch fragment cannon attacks until 8 in the evening. None of the villages along the coasts of the Kinmen Islands had been spared. The military accounted over 5,000 rounds had been fired to Kinmen. The offensive was a prologue of the cross-strait artillery battles between Communist China and Taiwan.

(Artillery Bombardment of September 3rd) In the fifteen-day period that followed September 3rd, Communist Chinese fired 8,767 cannon rounds towards the Kinmen area. The attacks damaged the Shuitou Wharf and several civilian housings, as well as killed over 10 military personnel; Lt. Col. Alfred Medendorp of the United States Military was among those killed in action. The heroic fighting spirit of the front defense line awed the Communist Chinese troops and earned the respect and admiration of the ROC and foreign nationals.

In memory of the unselfish and heroic sacrifice of Lt. Col. Medendorp, the R.O.C. Government issued a “Cloud and Banner Medal” of honor award to him. In 1992, upon the request of the National Guard Association of the United States, the government erected a monument at the spot where Lt. Col. Medendorp was killed. The monument was designed and constructed under the supervision of the contemporary Lieh-Yu Division Commander - Army Major General Kao Hua-Chu and the incumbent Chairman of the Veterans Affairs Commission. Following the completion of the stone, the Chief of the General Staff, General First Class Liu Ho-Chien inscribed the memorial epitaph. The stone (Lt. Col. Alfred Medendorp monument) was erected on August 7, 1992.

Colonel Medendorp, a National Guard officer from the
State of Michigan, volunteered to help defend freedom
After distinguished combat service in WWII.

Awarded the Republic of China
Order of the Cloud and Banner
November, 1954

Dedicated. 1992 Republic of China
in coordination with
National Guard Association of the United States

Posted by David Britten at 08:22 No comments: