Learning is not necessarily what you know but how you think

In the midst of movement to industrialize public education, there was a voice of reason and sanity, who like those same voices today that are drowned out by politicians and pseudo-reformers, was pretty much ignored. However, his message rings through in truth one hundred and twenty years later.

Education does not consist in knowing certain definite things, as Greek, Latin, or mathematics, but in that power and versatility of thought and emotion which elevate life into truth and virtue, and which may come from any form of true and deep experience which the individual has with the world about him. (p.39)


Today's reformers are stuck in a world of test-prep and measuring learning strictly based on what one knows versus how one thinks. Measuring rote knowledge is far simpler and much more profitable in a world of paper and online assessments. And on top of it, measuring rote knowledge instead of evaluating learning holistically provides an opportunity to point blame at the teacher.

Contact with the world, as well as the tuition of the school, produces wealth of experience and ripe wisdom. The individual's whole environment educates him; and the teacher, being but a small part of this, must not be accredited nor charged with the whole result. (p.39 continued) 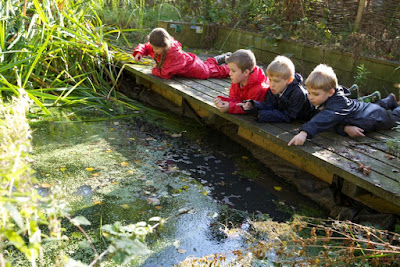 Twelve decades ago, academic leaders knew that the school and the teacher are but a small part of the education of a child and that whether or not that child succeeded in reaching a desired level of learning could not be solely the teacher's fault. Today, the reformists prefer to place the full blame on teachers and the schools they labor in, despite the overwhelming evidence that the home and community, complicit with socio-economic status, English language deficiencies, disabilities and crime, have an often greater impact on whether the child learns or not; all factors that cannot be accurately measured by achievement tests.

Tompkins, Arnold, PhD. The Philosophy of School Management. Ginn and Company, Boston. 1895
Posted by David Britten at 06:36 No comments: Links to this post

Michigan Continues to Stick it to the Poor

We already know that the socio-economic gap between the highest incomes and those living in poverty has grown over the past couple of decades, and the percent of school-age children in Michigan and across the country living in poverty continues to climb. But Michigan lately seems bent on extracting even more pain from low-income families and children:


Students from low-income families now represent a growing majority of the school children attending the nation’s public schools, the Southern Education Foundation has found in its policy research. ~ The Leadership Conference Education Fund, 2015

1. When Governor Rick Snyder took office back in January 2011, the state moved to reduce the Earned Income Credit for low-income families. Ironically, this was a program championed by conservative President Ronald Reagan.

2. When Proposal 1 to repair the state's roads and infrastructure was presented to the people back in November 2014, it was defeated by a resounding no vote in part due to a portion of the new taxes that would restore the Earned Income Credit for low-income families and repair the recent funding cuts to public schools.

3. A bill to cut much-needed welfare funds for low-income families if a child is truant from school has passed the Michigan Senate, ensuring that the most at-risk kids who are absent in large part due to the many hurdles faced by those growing up in poverty will be even more impoverished as a result.

4. Last week, the House Appropriations School Aid Subcommittee chair expressed his desire to shut down the Detroit Public School District despite the fact state policies, "white flight" over many decades, and a general decline in school-age population were the primary sources of the district's problems, not the thousands of low-income kids and families the district has tried to serve.

5. And just this week, the Michigan Department of Education indicated it will cut federal funds (a.k.a., Title I funding intended for schools to support low-income, at-risk students) if parents continue to opt-out their children from the annual high-stakes testing game.

6. Earlier this spring, Education Trust published a report that illustrates how the state legislature sticks it to school districts serving high percentages of students living in poverty. Michigan is one of only six states where the funding for high poverty districts is at least 5% less than low poverty districts. 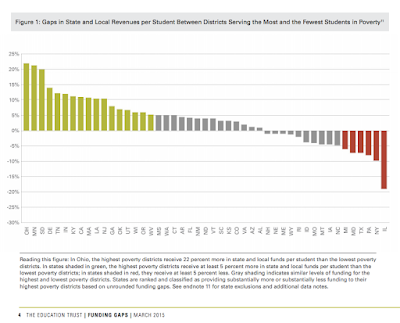 Certainly looks like the state is spot-on when it comes to reforming public education and addressing the impact poverty has on learning. Just keep sticking it to the poor until things shape up.

What's the old saying? "The beatings will continue until morale improves?"
Posted by David Britten at 09:20 No comments: Links to this post


"Most states began to reinvest in K-12 education during the 2013-14 and 2014-15 school years, our research shows, but these increases don't come close to offsetting the post-recession cuts. Thirty-five states funded schools lower in 2014-15 than in 2007-08. (Our research focuses on the major form of state funding for schools, usually known as "formula" funding. Census looks at total state and local funding.)"

This is very true in Michigan where K-12 foundation funding cuts at the time Governor Rick Snyder came into office were so severe ($470 per pupil in 2010 dollars) that even modest increases in the past two years have not recovered this lost funding (see chart, below for one district's example). The current budget awaiting the governor's signature continues the recent trend of providing for a modest increase without considering the damage done by the recession-era cut. When inflation factors are applied over the past twenty years, one can see why districts are struggling financially and unable to afford the reforms necessary to turn Michigan's educational outcomes around. 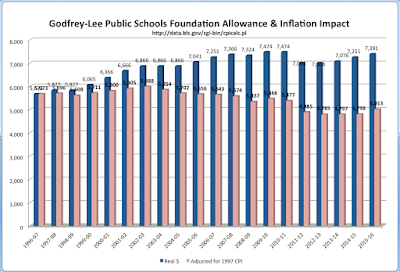 While these cuts continue their crushing impact on public schools in Michigan and across the nation, governors, legislative leaders and other pseudo-reformers are continuing to ask for more while choosing to pay for less.

"Deep school funding cuts make it difficult for schools to implement promising reforms such as high-quality teacher recruitment, class size reductions, learning time expansions, and high-quality early care and education. In addition, these cuts prompted school layoffs and pay and benefit cuts for the staff that remained. And the effects of the cuts will reverberate for years to come, as states' forgone investments in high-quality education -- leaving students ill-prepared for higher education and the workforce -- may continue to hold back their economies."

In 2013, according to the U.S. Census Bureau, Michigan ranked a mediocre:

The Center on Budget and Policy Priorities published a number of charts that validated Michigan's per pupil cuts to K-12 public education.  You can click on the link to see two of the most revealing charts that show Michigan in the red when it comes to funding public education.

In fact, read the entire article.

Posted by David Britten at 07:49 No comments: Links to this post

Education is all about Unity in Relationships 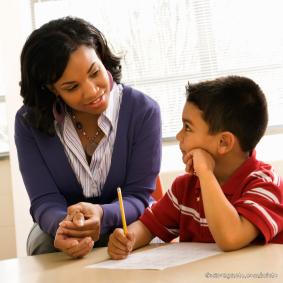 Two great thinkers separated by 120 years of an outmoded school structure that today more than ever serves primarily to interfere with the fundamental law of education -- unity in relationships between teacher and student.

Teacher and pupil, in co-operative touch to the end for which the school exists, of themselves constitute the school.... A clock and a blackboard may be parts of the school machinery; but the teaching process can go on without them, and the school is not destroyed by their removal.

... for the school is the organic unity between the teacher and the pupil.

"Theater" is the whole relationship between the audience and the drama. For theater to have its most transformative effects, it's essential to focus on that relationship and make it as powerful as possible. Nothing should be added ... unless it deepens it.


Unfortunately, much of the trappings of so-called modern education reform is simply "stuff" that detract from the real law of education and appear bent on destroying teacher-pupil unity. We haven't learned much over the last twelve decades.
Posted by David Britten at 07:32 No comments: Links to this post